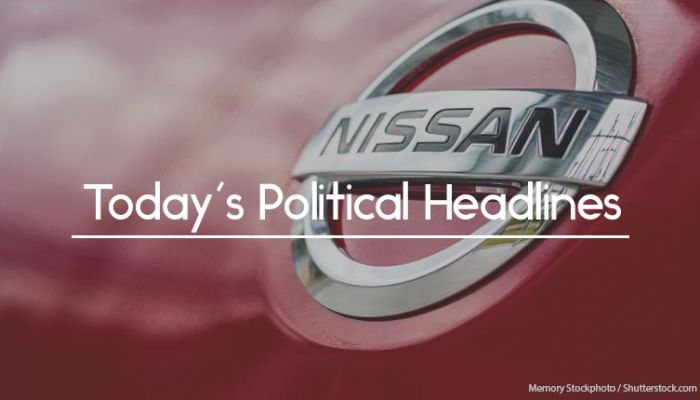 Ministers considering withholding £60m package from Nissan
According to The Times, the Government is considering withdrawing a £60m support package from Nissan, after it reversed its promise to build the next generation of its X-Trail SUV in Sunderland, giving the Government less than 24-hours’ notice. Business, Energy and Industrial Strategy Greg Clark said that while ‘no jobs will be lost’, the development was a ‘blow to the sector and the region’.

Women should be less ‘squeamish’ about money making, Truss says
Chief Secretary to the Treasury Liz Truss has told The Daily Telegraph that women should be less ‘squeamish’ about making money, claiming that female entrepreneurs often find a money-making focus ‘vulgar’ but that they should instead ‘celebrate’ profits. The Treasury is to release a report today showing that female start-up founders are missing out on investment.

Government intervention called for over cost of cystic fibrosis drug
In an exclusive, The Guardian says that campaigners are calling on the Government to intervene over the cost of the drug Orkambi which tackles the cost of cystic fibrosis. Negotiations between the NHS and the manufacturers have been in ‘stalemate’ since July. They’d like the Government to set aside the drug’s patent in the national interest.

Government sets up group of MPs to find backstop alternative
The BBC reports that the Government has established an Alternative Arrangements Working Group made up of leave and remain MPs to try and find a way of avoiding a hard border on the island of Ireland, after the ‘Malthouse Compromise’ plan gained what the Government called ‘significant support’. The group of MPs will have regular meetings with Stephen Barclay, the Brexit Secretary, and senior civil servants.

Johnson claims early election may be ‘scare tactic’
Writing for The Daily Telegraph, Boris Johnson claims that preparation for a snap election may be a ‘scare tactic’ designed to encourage Tory MPs to back Theresa May’s Brexit deal. He described the idea of an election this year as ‘lunacy’ because the ‘big questions’ about Brexit still haven’t been answered. Yesterday, Home Secretary Sajid Javid said that voters ‘would never forgive us’ if an early election was called.

Centrist Labour MPs plot split
The Times claims at a group of centrist Labour MPs are discussing leaving the party to create their own centrist political group, although a member of the group told the paper that though a split would be inevitable, it would not happen soon as ‘we’re all looking to the next set of Commons Brexit votes at the moment’.

Hancock to meet Instagram boss
The Daily Telegraph reports that Health and Social Care Secretary Matt Hancock is to meet the worldwide Head of Instagram, Adam Mosseri, on Thursday, to tell him to enforce the service’s ban on under-13s creating profiles, and to use Instagram’s experience in removing terrorist-related content to remove suicide and self-harm content.

NHS to use smart meters to track dementia patients
The Daily Mail says that the NHS is to use energy smart meters to track dementia patients at home, flagging up sudden changes of routine which might indicate that they need help and alerting relatives or carers. Privacy campaigners have raised concerns about the meters, but a trial is due to begin in Liverpool later this year.