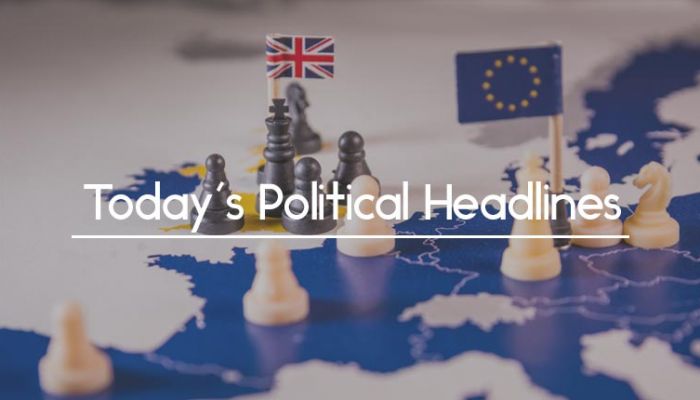 Today’s political headlines include MPs plotting to ‘seize control’ of Brexit, May’s claim that no Brexit is more likely than no-deal, the cost of air pollution and the EU is preparing to delay Brexit.

MPs plot ‘to seize control of Brexit’
The Daily Mail leads with details of what it calls a ‘plot by rebel MPs to seize control of Brexit’. Should May’s deal be defeated tomorrow, a bill drafted by Nick Boles, Sir Oliver Letwin and Nicky Morgan would empower the Commons Liaison Committee (dominated by remainers) to draw up a proposal backed by MPs, which the Prime Minister would have to negotiate with the EU, unless she can come up with an alternative within 21 days.

New strategy shows cost of air pollution
The Times says the Government’s Air Pollution Strategy, which will be published today, will show that it is costing hundreds of millions of pounds more in damaged health than had previously been admitted. However, almost all of its measures have already been announced and action on many big sources of pollution has been deferred.

EU prepares to delay Brexit
The Guardian claims that the EU is preparing to delay Brexit until July at least, as it prepares for Theresa May’s Brexit deal to be rejected by Parliament. The bloc is expecting an extension request in ‘the coming weeks’ and will then call a special summit to agree a ‘technical’ extension.

Labour suggests creation of ‘regulator of regulators’
According to the Financial Times, a report commissioned by Shadow Chancellor John McDonnell calls for the creation of a ‘pyramid structure’ of watchdogs, overseen by an overall ‘business commission’, with measures to ensure that regulators aren’t too close to the industries they regulate.

30,000 offenders would have been spared jail under Government plans
The Sun reports that 30,000 offenders would have been spared jail under plans to axe prison sentences of under six months which the Prison Minister, Rory Stewart, is considering. Stewart said that these sentences are ‘long enough to damage you and not long enough to heal you’, and abolishing them would ‘relieve a lot of pressure on prisons’.

HS2 considers reducing capacity to tackle costs
The Times says that HS2 is considering whether to reduce capacity by nearly a fifth to try to tackle ‘spiralling’ costs. The paper says that if the decision is made, this ‘is likely to renew questions over the value of the project’.

Concern over uncompetitive contracts
Research by the Financial Times shows that over the last three years, Government outsourcing has become ‘markedly less competitive’, with 23% of contracts being awarded without a tender in 2018, raising concerns about value-for-money and corruption.

Will this be the biggest week in politics of 2019? Don’t miss anything – find out more about Vuelio Political Services.