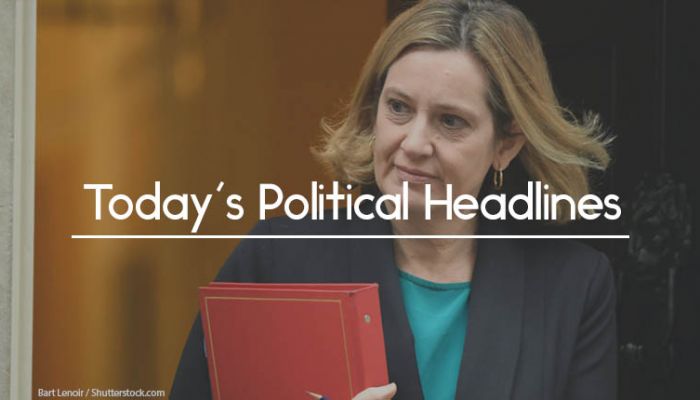 Today’s political headlines include the benefit cut to be axed, May calling unions to gain support for her deal, Cabinet ministers accused of undermining May and Shinzo Abe says the ‘whole world’ is against a no-deal Brexit.

Benefit cut to be axed
The Mirror reports that Work and Pensions Secretary Amber Rudd is to cancel a benefit cut which would have affected 15,000 families, three weeks before it was meant to be implemented. Under the ‘two-child limit’, families are not be able to claim Universal Credit or Tax Credits for more than two children, but Rudd will say today that extending the policy to cover children born before it was announced would not be ‘right’.

May calls unions in attempt to gain support for deal
The Times reports that Theresa May rang union leaders yesterday in a bid to win support for her Brexit deal from Labour MPs. According to the paper, Unite has not denied a claim by 10 Downing Street that the call was ‘constructive’, but the GMB’s response was ‘less positive’. The paper adds that Business Secretary Greg Clark and Defence Secretary Gavin Williamson made contradictory public statements about the impact of a no-deal Brexit on British businesses, with Clark saying it would be a ‘disaster’.

Cabinet ministers accused of undermining May
The Daily Mail has obtained a leaked email in which the Number 10 Director of Communications, Robbie Gibb, accuses leadership contenders Sajid Javid, Amber Rudd and Liz Truss of trying to undermine the Prime Minister, warning that ‘this situation cannot continue’. He accuses them of announcing their own initiatives last weekend when the media plan was being ‘starved out’ to ensure the ‘best coverage’ for the NHS plan.

CBI calls for MPs to back May’s deal
In an exclusive, The Guardian reports that Carolyn Fairburn, the Director-General of the CBI, is to use a speech today to urge MPs to vote for the Brexit deal in order to avoid a ‘hugely damaging cliff edge’ and a shrink in GDP of up to 8% in a no-deal Brexit scenario. The paper adds that the Government has now signed two contracts to store drugs as part of its planning for a no-deal Brexit, but a third location has yet to be secured.

4,000 civil servants to be seconded to tackle no-deal Brexit
According to The Times, up to 4,000 civil servants are being seconded from their departments for six months to work on a no-deal Brexit. The Permanent Secretary at the Department for Education said that while ‘key services continue to operate’ other parts of his department would be mothballed. Defra and HMRC are to see a boost in their staff numbers.

Government criticised for failure to regulate lending
The Guardian says that the Government’s refusal to regulate lending to small businesses in its response to the Commons Treasury Committee’s has been criticised by the committee’s chair, Nicky Morgan. She called on the Financial Conduct Authority to be ‘given the powers to provide protection to SMEs now’.

Brexiteers blame EU for loss of Jaguar Land Rover jobs
The Daily Telegraph reports that Eurosceptic MPs are using the decision by Jaguar Land Rover to cut 4,5000 jobs in the UK and move production of the Land Rover Discovery to Slovakia as a justification for Brexit. Jacob Rees-Mogg said that the EU ‘uses our money to move our jobs from the UK to other EU countries.’ While Slovakia is a net recipient of EU funding, the funding it gave the firm to open the factory did not come from the EU.

Brexit often dominates the headlines but domestic policy still affects you. Keep on top of everything with Vuelio Political Services.