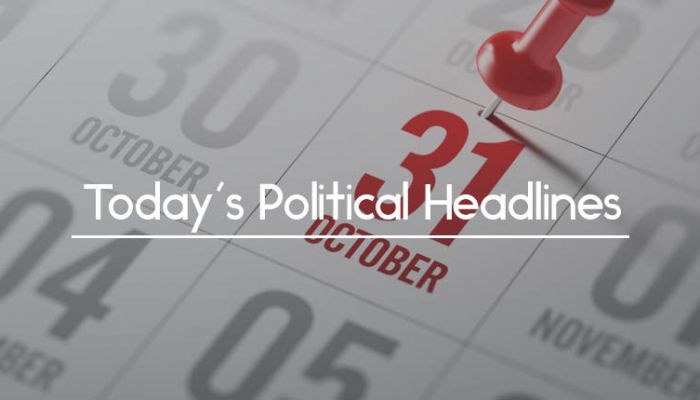 UK given Brexit delay until October
As The Guardian reports, last night European leaders agreed to delay Brexit until 31 October, giving the UK an option to leave earlier if the deal is approved by Parliament. The EU will review the UK’s behaviour at a summit in June, with European Council President Donald Tusk suggesting that a further extension could be granted if necessary. French President Emmanuel Macron advocated a shorter extension, but settled for a compromise after other leaders, including German Chancellor Angela Merkel, who advocated a delay until December, said this would not allow the impasse in the UK to be resolved.

Conservative MPs plot to oust May
The Daily Telegraph claims that Conservative MPs are ‘plotting’ to get rid of Theresa May by changing rules which mean that she cannot be ousted until a year after the last confidence vote, attempting to gain 10,000 members’ signatures to support the change. The executive of the 1922 Committee of backbench Conservative MPs yesterday discussed moving against May after next month’s local and European elections. According to The Guardian, Theresa May will try to remain as Prime Minister during the delay to Brexit and continue to try to get her Brexit deal through Parliament.

16 MPs claim taxpayers money for London homes while renting their own out
The Daily Mirror reveals that 16 MPs, including International Trade Secretary Liam Fox, are claiming money to rent homes in London, while also letting properties in the city. While this is not a breach of parliamentary rules, the Defend Council Housing campaign said that the news was ‘scandalous’ and the ‘gravy train’ needed to be ended.

Scruton sacked over ‘unacceptable comments’
The Times reports that Sir Roger Scruton has been sacked as a housing adviser to the Government after making ‘unacceptable comments’ about Islamophobia, antisemitism, George Soros, the Hungarian Prime Minister Viktor Orban, and China in an interview with the New Stateman. Labour is calling on the Government to remove his knighthood.

Senior Tories urge Brexiteer ministers to stay in post
The Sun claims that senior Tories have told Brexit-supporting ministers not to resign over cross-party talks with Labour or a possible second referendum in order to keep a ‘balance of power’ with pro-EU ministers, citing the example of the appointment of Amber Rudd following the resignation of Esther McVey, and to avoid a Jeremy Corbyn-led government.

Wright says online rules won’t affect press freedom
The Daily Mail reports that Digital, Culture, Media and Sport Secretary Jeremy Wright has used a letter to the Society of Editors to promise that the proposals in the new Online Harms White Paper would not affect ‘journalistic or editorial content’, with safeguards introduced to protect the role of the press.

Minister should oversee Parliament refurbishment, Spelman says
The Times says that Dame Caroline Spelman, chair of the committee on the restoration of Parliament, has said that a minister should be appointed to oversee this, suggesting Andrea Leadsom as a possible candidate. She warned that if this did not happen, there could be repeats of last week’s incident which saw the Commons suspended after a leak.

Government criticised over response to childcare and Universal Credit inquiry
The Sun says that members of the Commons Work and Pensions Committee have criticised the Government’s response to their inquiry into childcare and Universal Credit as ‘skimpy and disappointing’, demanding they look again at the ideas they suggested to help parents return to work, accusing it of ‘dismissing the serious problems that are plaguing parents’.

Rumours that Brexit has been further delayed because everyone enjoys reading the Vuelio Brexit Briefing are unsubstantiated. Sign up to our political updates here.