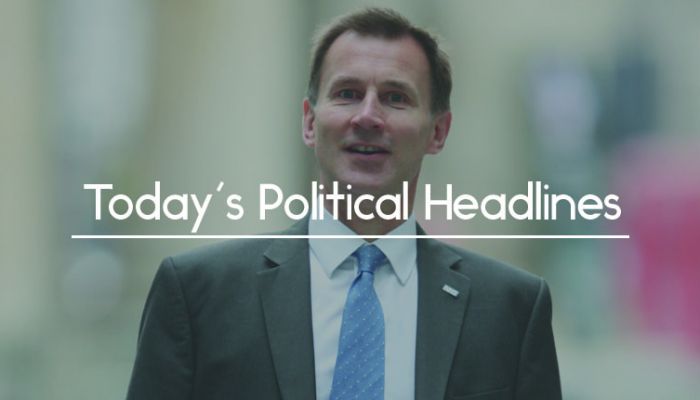 Today’s Political Headlines include Jeremy Hunt’s call for increased NHS funding, May under pressure over Cambridge Analytica, Corbyn’s antisemitism apology and the UK ‘fighting’ to stay in the EU’s satellite programme.

Jeremy Hunt in call for ten-year deal to fix ‘crazy’ health budget
The Times reports that Jeremy Hunt called health funding ‘crazy’, launched a ‘political offensive’ for a ten-year NHS spending deal and backed moves for a ring-fenced tax on Peston on Sunday. The paper describes this as a ‘direct challenge’ to Philip Hammond. The news comes as 98 MPs, including the chair of the Health Select Committee Sarah Wollaston and 20 other committee chairs, backed a call for a commission on increasing NHS funding.

May under pressure over Cambridge Analytica scandal
The Guardian claims that pressure is growing on the Prime Minister to investigate what members of her cabinet and staff knew about allegations regarding Vote Leave and Cambridge Analyticia. Pro-EU campaign group Best for Britain has written to Theresa May with a series of questions. The Times adds that the fate of May’s political secretary, Stephen Parkinson, will be decided today after it was claimed that he helped the campaign to cheat spending limits and outed a whistleblower as gay.

May fights to stay in EU’s satellite programme
The Financial Times reports that Theresa May is trying to prevent the EU from leaving the UK out of the €10bn Galileo satellite project. The next round of contracts is expected to be awarded in June, but British companies will be excluded in order to protect the security elements of the programme. A senior official described the EU’s approach as ‘outrageous’.

Labour plans to amend Brexit bill to give Parliament more say
According to The Guardian, Keir Starmer will use a speech in Birmingham today to announce that Labour is to table amendments to the EU (Withdrawal) Bill which would prevent the UK from leaving the EU without a deal if Parliament rejects the outcome of the Brexit talks. Instead, MPs could pass a motion setting out the next steps, including resuming negotiations.

‘Damning report’ on Government childcare schemes
The Financial Times says that, in a ‘damning report’ published yesterday, the Commons Treasury Select Committee pressed the Government to reform childcare rules in order to boost productivity and to increase the take-up of tax-free schemes. The report also criticised problems with the Government’s tax-free childcare website.

Councils spend £43m in compensation for injuries caused by damaged roads
The Times says that councils have spent over £43m over five years in settling legal claims brought by people injured on the country’s deteriorating roads. The figures were obtained by the charity Cycling UK, which warns that cyclists are being put at serious risk ‘due to years of persistent underinvestment in our rotting local road networks’. The Government has announced a further £100m will be given to local authorities for maintenance.

The Political headlines were curated by the Vuelio political services team.