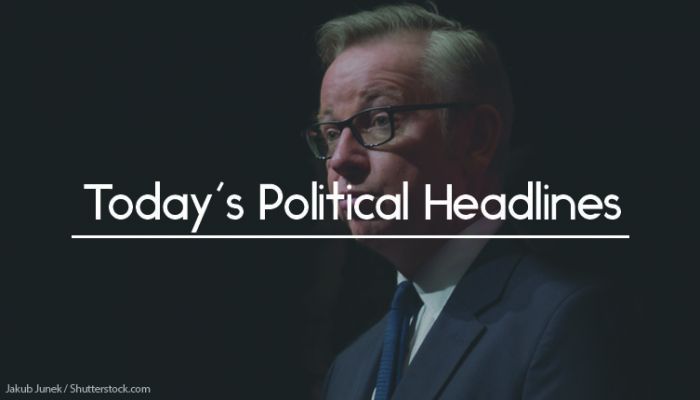 Rivals warn that Gove would hand keys of Number 10 to Corbyn
The Times says that leadership rivals have said that electing Michael Gove would help to ensure that Jeremy Corbyn becomes Prime Minister, after it emerged that Gove was thinking about extending the Brexit process as the UK is not prepared enough for a no-deal Brexit. Priti Patel warned that the ‘longer we delay Brexit the more oxygen we give to alternative political parties’. It has also been suggested that he may win the backing of Amber Rudd after talks between her and Boris Johnson collapsed over Johnson’s support for no-deal.

Hunt and Javid raise concerns about Huawei ahead of Trump visit
The Daily Telegraph reports that Jeremy Hunt has said that the UK would ‘never take a decision that would affect our intelligence-sharing capabilities with the US’ while Sajid Javid also raised concerns as the US Ambassador to the UK, Woody Johnson, described the UK’s intention to let Huawei bid for 5G contracts as a ‘big risk’, ahead of President Trump’s visit today. The Daily Mirror says that Trump’s visit will be the most expensive in history, costing around £40m in security provision, with 10,000 police officers brought into central London.

Widdecombe in gay cure row
The Daily Mirror says that there has been a backlash against Ann Widdecombe, the former Tory minister and newly-elected Brexit Party MEP after she suggested that ‘science may produce an answer’ to homosexuality and defended her support for ‘gay cure’ treatments. Labour MP Wes Streeting called her ‘a relic from a bygone era’.

Brokenshire to say young should use pensions to buy houses
The Daily Telegraph reports that Housing, Communities and Local Government Secretary James Brokenshire will today say that young people should be able to take money out of their pensions to fund a deposit on their first home, but former pensions minister Sir Steve Webb warned that this would force prices up and leave people working longer. The BBC adds that Brokenshire will also call on the least popular Tory leadership contenders to withdraw.

Labour MPs call for independent complaints procedure after Prescott allegations
The Guardian says that Labour MPs Jess Phillips and Stella Creasy are urging the party to adopt an independent complains procedure, after e-mails leaked to The Sunday Timesshowed that the suspension of staff member David Prescott from the party over harassment allegations was blocked after the intervention of members of Jeremy Corbyn’s office.

Gyimah enters leadership election and pledges second referendum
The Times reports that a thirteenth candidate, Sam Gyimah, has entered the Conservative leadership election, becoming the first one to back a second Brexit referendum, but pledging that if he became Prime Minister he would not campaign for either side, but would vote to remain in the EU.

Johnson campaign foils Gove’s attempt at spying
The Sun claims that an attempt by Michael Gove’s leadership campaign team to spy on Boris Johnson’s campaign and find out when he was holding his launch event to avoid a clash has been foiled. Johnson is expected to announce his plans to reform education today, and may reveal his ‘army’ of supporters tomorrow

Hancock to promise no immigration restrictions on medics
The Guardian reports that Matt Hancock, the Health and Social Care Secretary, will today promise to lift all immigration restrictions on qualified doctors and nurses, should he become Prime Minister. He will say the NHS was ‘the best health service in the world’ and under his leadership he would ‘make sure it has access to the very best talent in the world’.