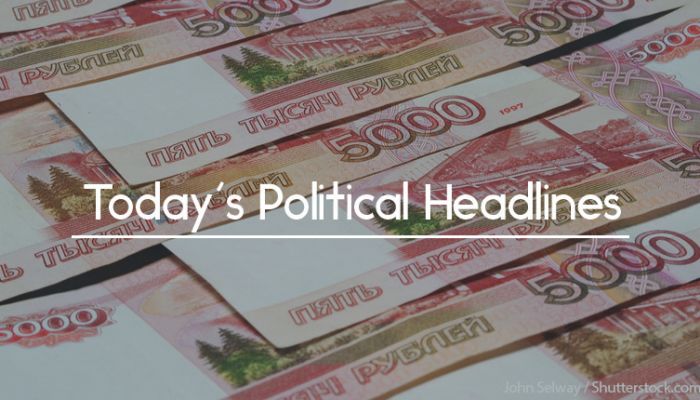 Today’s Political Headlines include turning a blind eye to Russian money, AI to save lives, Johnson’s warning and the UK’s Galileo rival.

Government criticised for turning ‘blind eye’ to Russian money
The BBC says that a new report by the Commons Foreign Affairs Committee has found that London is being used to hide ‘corrupt assets’ of Russian President Vladimir Putin and his allies, with the UK turning a ‘blind eye’ to ‘dirty money’. Ben Wallace, the Security and Economic Crime Minister, has cast doubt on the report’s findings because he was not called to give evidence to the committee. Separately, the Financial Times reports that the UK has not renewed the visa of Russian oligarch and Chelsea owner Roman Abramovich, leading him to miss the FA Cup final.

May pledges to use artificial intelligence to save lives
The Times reports that Theresa May is to deliver a speech today in which she will promise to use artificial intelligence to study patient data to stop cancer or dementia before people know that they have it. She will say that this new technology is key to national prosperity and will save tens of thousands of lives a year within fifteen years.

Johnson delivers ‘thinly-veiled warning’ over customs union
The Guardian claims that Boris Johnson has ‘delivered a thinly-veiled warning’ to the Prime Minister that he still expects her to deliver a deal which would avoid a backstop keeping the UK aligned to the customs union after 2020. He said that ‘Brexiters fearing betrayal over the customs backstop must understand that the PM has been very clear that it is not an outcome we desire; we want a deal with the EU and she will deliver it.’

UK may partner with Australia to deliver Galileo rival
According to the Financial Times, the UK is aiming to launch the first tenders for a satellite navigation system to rival the EU’s Galileo project later this year, and hopes that Australia will become a partner in the programme. The BBC adds that Gavin Williamson, the Defence Secretary, is to launch the UK’s first space strategy today, claiming that the UK needs to be ready to counter ‘intensifying threats’ in space, such as the ‘jamming’ of satellites.

Johnson visits Argentina
The Daily Mail reports on Boris Johnson’s visit to Argentina, the first by a British Foreign Secretary for 22 years. He laid wreathes with his Argentinian counterpart Jorge Faurie at a ceremony at the Monument to the Fallen in the Falklands, commemorating the Argentinian troops who died in the Falklands War. Argentina’s chief of the council of ministers, Mercos Pena, will reciprocate this gesture at St Paul’s Cathedral next month.

Gove and Davidson launch new thinktank
The Guardian says that Michael Gove and Ruth Davidson are to launch a new Tory thinktank, called Onward. Gove argues that his party ‘is at its best when it appeals beyond its core vote and puts forward a reforming, forward-looking agenda that responds to the concerns of the entire nation.’ Writing in the paper, Davidson calls on Conservatives to embrace the country’s ‘open liberal outlook as a positive – and not a threat.’

MPs criticise Motability over pay and reserves
The BBC reports that a report by the Commons Treasury and Work & Pensions Committees has found that the £1.7m paid to the chief executive of the Motability scheme is ‘totally unacceptable’, while funds of £2.4bn were being needlessly hoarded. The Government has said that the National Audit Office will look into the issues raised in the report.