Various newspaper outlets were unhappy with the guests on the Sunday political shows due to the heavy presence of those who campaigned for ‘Remain’ in the EU referendum. The star of Sunday’s shows was not a guest, though, it was Emma Barnett (standing in for Marr) who put the politicians under the microscope.

Matt Hancock represented the Government on both Peston and Marr. Hancock was asked by Barnett about an invitation he sent to 14 large social media companies to attend a Government meeting, which resulted in only four attending. Hancock tried to dress this up by saying other social media companies exist and have issues, but Barnett pointed out that it does not inspire much confidence when these companies do not bother to attend something organised by the Government.

Peston reiterated that the Government does not have the power to do anything to social media companies. Hancock replied by saying the Government will publish a white paper later this year and will legislate in the next couple of years to get the powers it needs.

Shadow International Trade Secretary, Barry Gardiner, faced Emma Barnett and was grilled on Labour policy relating to the single market. Focus was put on the Labour candidate for the upcoming Lewisham East by-election, Janet Daby. Barnett said Daby is asking people to vote for her and she supports staying in the single market, which is not Labour policy.

Gardiner was then questioned on his view versus the Labour party’s position. Gardiner said the position of the Labour party is to hold the Government to account on the promise they made to secure the same benefits outside the EU as the country enjoys inside the EU. Barnett presented Gardiner with his own remarks criticising this position. Barnett noted that Jeremy Corbyn has kept Gardiner in place despite this criticism but Owen Smith did not enjoy the same privilege.

Len McCluskey was also on Peston and seemed to be somewhat sympathetic to Ken Livingstone when asked whether the former London Mayor should be expelled from the party. McCluskey said a rule against stupidity would result in many people being expelled including Livingstone. He was accused of dodging the question as Livingstone has not been expelled for being stupid. Peston asked McCluskey about his opinion on the possible deselection of Labour MPs who criticise Corbyn, McCluskey said criticism is fine so long as it is constructive.

McCluskey then got into a debate with Lord Peter Mandelson on the terms by which the UK will leave the single market. McCluskey said the Labour party would negotiate better with the EU than the current Government; Mandelson said the Government is making the same claim, but it has little real meaning on its own.

The day after the Royal Wedding, Lord Mandelson said the wedding made him so happy he is now thinking about getting married.

Speaking on the East Coast Main Line being bought back into public hands, Shadow Transport Secretary, Andy McDonald, said private companies do not invest in the railway; Sophie Ridge said Virgin had invested more in two years than the five before that. McDonald was asked by Ridge whether fares under Labour would go down – he could not commit to this but said they would be more affordable. Minister for Digital, Margot James, said the people who support renationalisation did not live through the days of British Rail.

McDonald was also asked about allegations of bullying by John Bercow, the Shadow Transport Secretary responded by saying he thinks Bercow is an excellent speaker. 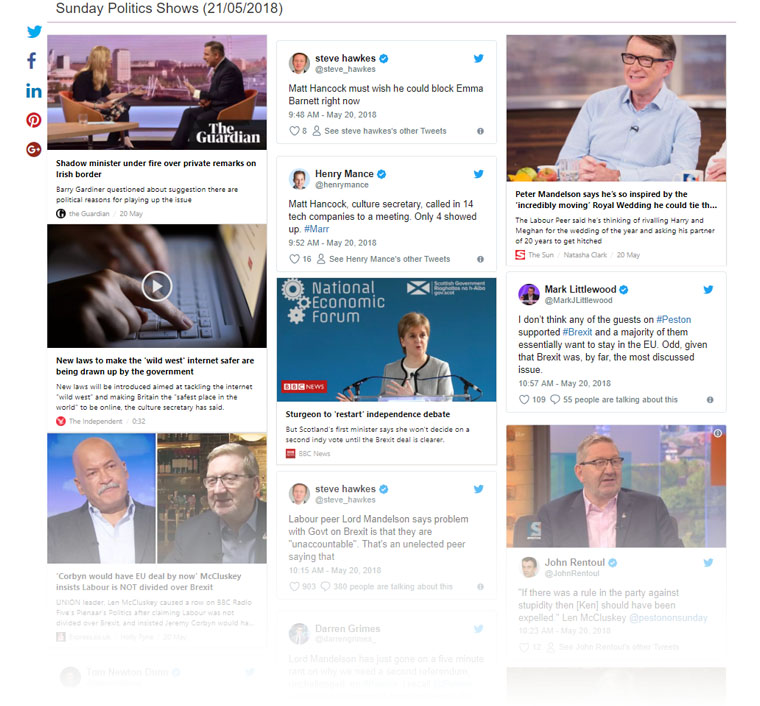