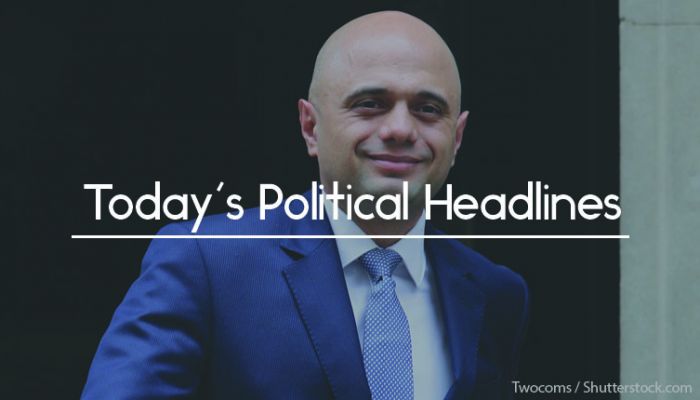 Both the Guardian and The Times lead on Sajid Javid’s debut as Home Secretary, questioning the extent to which he may amend policy on immigration. The Times has reported that Javid has told the Home Office that he will ditch the policy of creating a ‘hostile environment’. He criticised the use of the term ‘hostile’, calling it ‘unhelpful’ and not representative of the UK’s values. The newspapers claim that Javid will consider the department’s structures, as well as reviewing individual policies in the upcoming weeks.

Lords defeat Government in Brexit vote
The Daily Mail’s front page features an editorial on the Lords’ Brexit victory yesterday. May was compared to Adolf Hitler during the debate last night as peers handed the Government another defeat over Brexit. The House of Lords voted in favour of giving Parliament powers to stop the UK from leaving the EU without a deal. 19 rebel Tories backed the amendment, which was passed by 335 votes to 244. If the amendment is not overturned by the Commons, May will lose the option of walking away with no deal. The Mail says that “the Remainer elite, in cahoots with Brussels, is fighting a guerrilla war against Brexit using any means it can”.

Trump postpones decision over EU trade tariffs
The Guardian has reported that Donald Trump has postponed a decision on the introduction of EU trade tariffs. The White House has extended the EU’s exemption from tariffs on steel and aluminium, which was due to expire today. In March, Trump imposed a worldwide 25% tariff on steel imports and a 10% tariff on aluminium, granting temporary exemptions to Australia, Argentina, Brazil, Canada, Mexico and the EU. The White House has announced that, in addition to those involving the EU, negotiations with Canada and Mexico have also been extended.

Israeli Prime Minister accuses Iran of lying about weapons programme
The Daily Telegraph devotes its front page to the television broadcast delivered last night by Israeli Prime Minister Benjamin Netanyahu, accusing Iran of lying about its weapons programme both before and after the 2015 nuclear deal. Netanyahu claimed that Israeli spies had obtained ‘half a tonne’ of confidential documents proving that Iran’s leaders had failed to provide a full account of their past nuclear activities and that they were maintaining the expertise to build a bomb in the future. Netanyahu declared ‘the nuclear deal is based on lies. It is based on Iranian lies and Iranian deception’.

Theresa May faces mounting pressure to resign
The Daily Mirror’s front page features the headlines ‘Mayday Mayday’, referring to a ‘Prime Minister in Crisis’. The story reports on the mounting pressure on Theresa May to resign over the Windrush scandal. The newspaper speaks of May being left exposed to attack, after the resignation of her close ally Amber Rudd and criticism from new Home Secretary Savid Javid over her previous ‘hostile environment’ immigration policy.

The UK faces a care crisis
The Daily Express leads with two stories that it claims highlight a ‘caring crisis’. One is about a man suffering from Parkinson’s who was reportedly beaten in a care home, while the other story is about a terminal cancer patient’s 16-hour wait for a hospital bed.

Vuelio political services are available to fulfil your political needs.