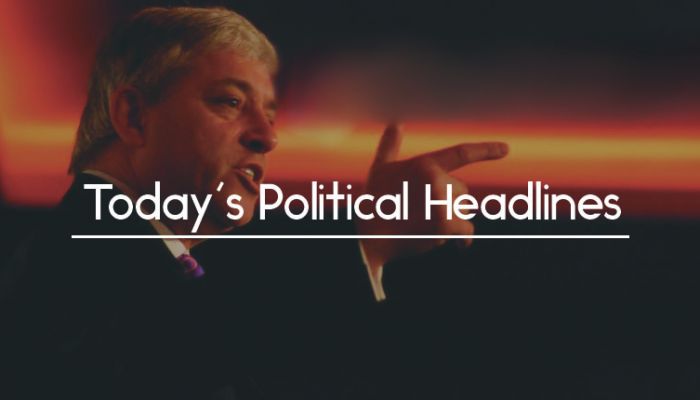 Bercow accused of bullying by former private secretary
Speaking to BBC Newsnight, Angus Sinclair, John Bercow’s former private secretary accused the Speaker of bullying. By speaking about his experiences, Sinclair was breaking the terms of a non-disclosure agreement signed in 2010, as part of a deal in which he was paid £86,250, but said that he felt that this was ‘in the public interest’. Bercow has denied the accusations, which follow similar ones about Sinclair’s successor, Kate Emms.

Eurosceptic MPs threaten Government ‘collapse’ over customs plans
The Daily Telegraph says that sixty Conservative MPs from the European Research Group led by Jacob Rees-Mogg have sent the Prime Minister a thirty page dossier opposing plans for a post-Brexit customs partnership with the EU, warning that the Government will ‘collapse’ if she continues with them. According to The Guardian, the Cabinet Brexit sub-committee will not decide on the policy today, in order to head off a rebellion.

May rejected plans to exclude doctors from migration quotas
The Financial Times reports that Theresa May rejected calls from Amber Rudd to exempt doctors coming to work in the NHS from quotas for highly skilled migrants and claims that the Home Office may have falsely accused up to 7,000 foreign students of faking their English proficiency and ordered them to leave the country. The Guardian says that Labour is to use a parliamentary procedure to try to force the Government to publish papers relating to the Windrush scandal, The Daily Telegraph raises fears of another scandal over the deportation of highly-skilled migrants for minor tax errors, and The Times reports that ministers are investigating claims that an official received a bonus for deporting illegal migrants.

Government backs down over ‘dirty money’ amendment
The Guardian says that the UK’s overseas territories will be forced to adopt public registers of company ownership by the end of the decade, after the Government conceded its support to a backbench amendment designed to hamper the flow of ‘dirty money’. The amendment was tabled by Conservative MP Andrew Mitchell and Labour MP Margaret Hodge.

Brexit thinktank founder accused of working for Russia
The Times reports that Bob Seely, a Conservative MP, has accused Christopher Chandler, founder of the pro-Brexit thinktank the Legatum Institute of being a suspected Russian agent. He cited security files, authenticated by French, British and American sources. The institute has dismissed the claims as ‘complete nonsense’.

Cabinet ministers warn that local elections could lock Tories out of London
According to The Daily Telegraph, cabinet ministers have privately warned that Thursday’s local elections could lock the Conservatives out of London ‘for a generation’, which could be ‘hugely damaging’ to Theresa May’s leadership. Conservative strongholds such as Westminster or Wandsworth could be lost, the paper suggests.

Hammond threatens to disrupt EU’s Galileo project
The Financial Times claims that Chancellor Philip Hammond wants to undermine the EU’s Galileo satellite navigation project by disrupting the transfer of encryption technology from the UK, following the EU’s decision to bar UK companies from sensitive parts of the project.

Vuelio political services are available to fulfil your political needs.