This Sunday, the political shows offered up guests from across the political spectrum and yet one of the biggest headlines was that Andrew Marr – a man who has been interviewing and reassuring guests for over 10 years – was caught on mic saying that Penny Mordaunt gave a good interview.

International Development Secretary, Penny Mordaunt, was the guest who faced the most pressing questions in the wake of the scandal surrounding Oxfam. Mordaunt sent a strong message to the charity saying that funding will be withdrawn if it does not comply fully with the authorities. This was also a wider warning to aid charities that if they don’t protect vulnerable people they face the risk of losing Government funding. Mordaunt confirmed she is still chipper about the prospects for Brexit and rejected Marr’s suggestion that she and her fellow pro-Brexit MPs misled the public into thinking it would be an easy process. Mordaunt also said that in the coming week more meat will be put on the Brexit bone. At the end of the interview Marr told her the interview was ‘very good’ – which inevitably led to people voicing concerns at the political standpoint of the BBC.

Supporters of the EU, Anna Soubry and Chuka Umunna appeared together on Andrew Marr’s sofa to show a united cross-party image for Remain. Soubry went as far to say that she thinks there is a majority in the House of Commons who are against the UK leaving the Customs Union and the single market. Soubry also welcomed the fact that ideologically she was closer to Labour MP Umunna than her fellow Conservative Jacob Rees-Mogg. This was not the last mention of Jacob Rees-Mogg as Umunna said he cannot imagine Jeremy Corbyn instructing Labour MPs to vote the same way as some of the Brexiteers.

UKIP leader Henry Bolton also took questions from Marr. Bolton unsurprisingly does not want UKIP to have a leadership election. His reasoning was that if another leadership election took place then UKIP would not be able to shape the Brexit deal.

Appearing on Peston, Alastair Campbell raised concerns for the aid budget saying that due to the scandal surrounding Oxfam, figures on the right of British politics will use the scandal to further their aims and attempt to reduce aid spending. Campbell had his advice on Brexit rejected by John McDonnell, with the Shadow Chancellor accusing Campbell of ‘threatening politics’. James Cleverley suggested this was hypocritical, on Twitter.

Work and Pensions Secretary, David Gauke, represented the Government on Peston and he faced questions on whether Philip Hammond has been silenced by Theresa May after it was revealed that he would not be one of the Ministers ‘putting meat on the Brexit bone’. Gauke said the Chancellor not giving a speech ‘doesn’t mean the Chancellor is not expressing his views internally in the Cabinet’.

You can make a canvas for any type of story, campaign or coverage. 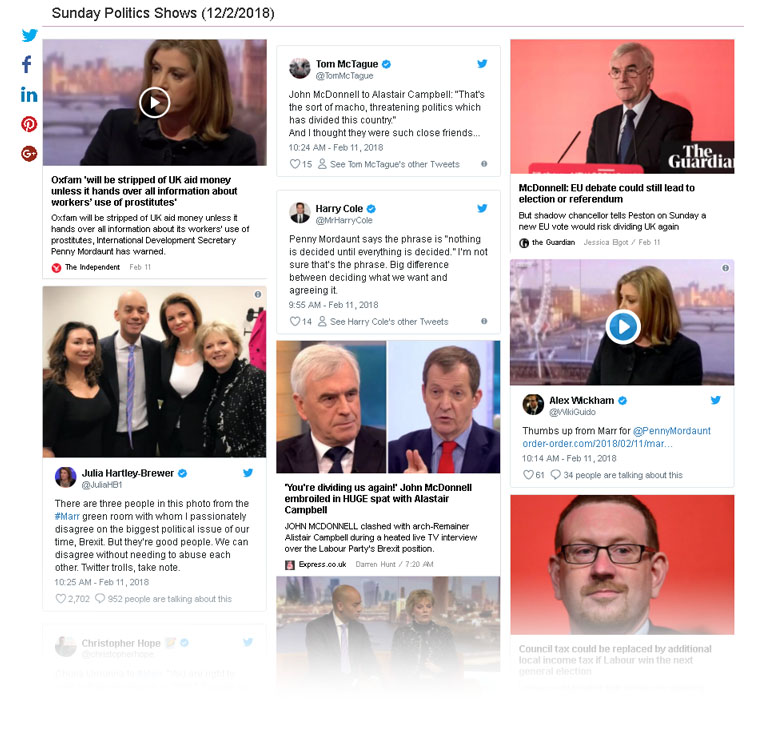