Sunday marked the 2018 return of all the usual political shows, which meant there was a plethora of guests being interviewed.

Alongside new Chair of the Conservative Party, Brandon Lewis and Shadow Foreign Secretary, Emily Thornberry, Andrew Marr had guests coming from Holyrood and Hollywood with First Minister of Scotland and leader of the SNP, Nicola Sturgeon and Meryl Streep, Steven Spielberg and Tom Hanks.

Emily Thornberry did very little to convince Donald Trump he would be welcome in the UK, labelling him ‘a racist’ and an ‘asteroid of awfulness’. The Shadow Foreign Secretary did not stop there, saying Theresa May had humiliated the Queen by inviting the President to the UK. Marr pulled Thornberry up on her remarks by saying this attitude could lead to it being harder for the UK to secure a trade deal with the US, but Thornberry responded by saying trade deals are complex processes and it would not depend on the pen of Donald Trump.

Marr finished the exchange by saying we do not know how long Trump will be around, it could be three more years or it could be until 2024, and greater diplomacy could go a long way. Thornberry also spoke on John Worboys, stating he is a ‘threat to women’, and previous rape cases have not been prosecuted properly despite improvements being made.

Brandon Lewis took a different approach to Thornberry by saying it was right for Trump to be invited and discussed how Britain should pursue its relationship with the US, declaring it a ‘very important relationship’. Lewis did condemn Trump’s alleged remarks where he is accused of referring to African Nations as ‘shithole’ countries.

Marr also called the reaction to this tweet from the Tories about banning credit card charges, ‘slightly embarrassing’ as it showed the Conservatives taking credit for EU legislation. Lewis also spoke on the Worboys case letting us know he understands the outrage and how the Justice Secretary will be doing all he can to make sure Worboys remains behind bars.

Sturgeon on Brexit
The First Minister of Scotland was given a very different line of questioning, mainly focusing on how Brexit will impact Scotland. Sturgeon put forward her view that staying in the single market and the customs union would be the least harmful option. When asked whether she accepts that Scotland will be leaving the EU, Sturgeon said she wants an alternative and for the least damaging scenario to be the one that is followed. Marr questioned Sturgeon on whether the Scottish people are actively interested in Scotland becoming an independent country as it does not affect their day-to-day lives. Sturgeon argued back saying this is a misconception people have been making for her entire political life. She said it is not a ‘constitutional abstraction’ as independence is linked to the economy and living standards.

Robert Peston’s headline guests were Culture Secretary, Matt Hancock and Jeremy Corbyn. Hancock suggested the amendments made by the House of Lords last week on Leveson and press regulation could be the beginning of the end for democracy. Hancock was then asked about pay at the BBC and his remarks that men are being paid too much at the broadcaster. When Peston suggested this may just be an operation of the market the BBC operates in, Hancock rejected this by saying the BBC has a ‘special responsibility’ to act on equal pay due to the licence fee. Hancock went on to say he will be having discussions with the Director General of the BBC in the next few weeks about pay for stars. Like Lewis and Thornberry on Marr, Hancock was asked about John Worboys and said it is a positive step that the Ministry of Justice will be considering this case after questions were raised over the process.

Corbyn on Trump
Jeremy Corbyn let Peston know he was not disappointed by Donald Trump cancelling his visit to the UK but took a more measured view than Thornberry by saying he will eventually come. He faced questions on the Labour Party’s position on Brexit, where Corbyn made it clear the Party is not calling for a second referendum on the terms of the UK’s Brexit deal but instead a meaningful vote in Parliament. Peston noted that Corbyn was speaking in the present tense so he was not ruling out changing this position later. The Labour leader took issue with remarks Nicola Sturgeon (and some of his backbenchers) have been making by calling for the UK to join the single market, as for him, leaving the EU means leaving the single market.

Other points of note from Sunday’s shows were Chuka Umunna on Sunday with Niall Paterson, claiming the remarks made by Corbyn were wrong. More disagreement in the Labour Party could be seen when Barry Gardiner told Sunday Politics that he would not have used the same language John McDonnell used to describe Esther McVey after a video emerged of him quoting an activist who said she should be ‘lynched’.

UKIP Chairman, Paul Oakden also told the BBC that party leader Henry Bolton would have to make some tough decisions to make.

Check out our Canvas from Sunday’s political shows and learn how to make your own here. 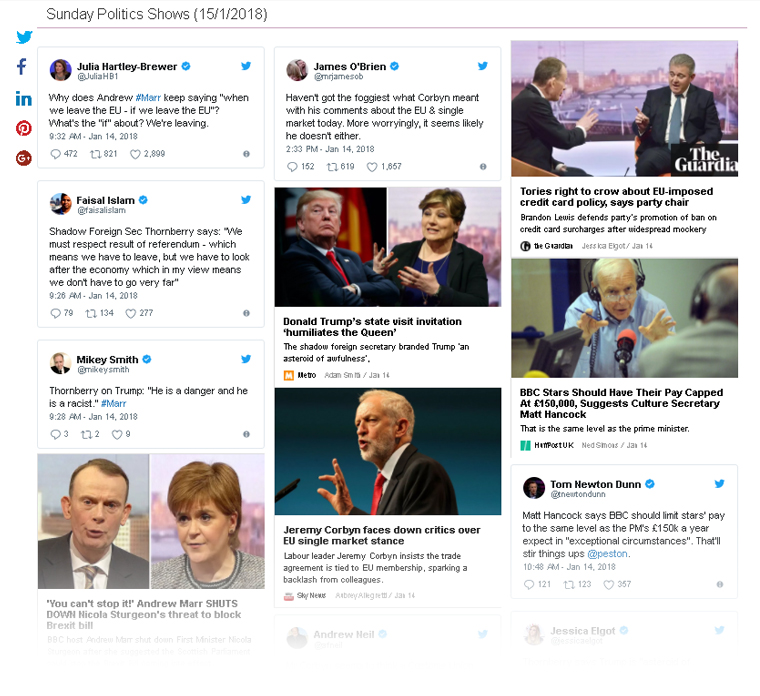