This Sunday, the political shows offered up guests from across the political spectrum including the Prime Minister, First Minister of Scotland and the leader of the Lib Dems.

Theresa May was the headline guest on Sunday, with her appearance on Mar. The Prime Minister was, of course, speaking about the Brexit speech she gave on Friday where she was ‘being straight with people’.

The biggest point of note from the interview was May making clear that the UK will not be asking for ‘passporting’ rights in the Brexit negotiations, with May preferring to negotiate access to the EU’s financial services market in a new trade deal. Her reason for this is that the City of London is too important to be at the table without any say in the rules.

The rest of the Prime Minister’s appearance on the show was made up of her defending her speech and attempts at sending messages to Brussels with her ambitious and practical Brexit proposals. May also said that all sides in the negotiations are working for there to be no hard border between Northern Ireland and the Republic of Ireland.

The discussion around the Irish border did not stop there, with the Deputy Prime Minister of Ireland, Simon Coveney, making an appearance (Coveney also holds the positions of Minister for Foreign Affairs and Trade, and Deputy Leader of Fine Gael). Coveney said he was ‘not sure’ whether the EU would support the UK’s plan for the Irish border. He feels that the EU would want to protect the integrity of the EU single market, Coveney said the idea put forward by May was a good way to start the discussion but by no means would it be a solution.

Lord Mandelson and Iain Duncan Smith also appeared on The Andrew Marr Show, in a blast from the past, both giving their take on Brexit. Mandelson pointed out that the UK is targeting the US for a free trade deal but Donald Trump has recently said free trade deals are ‘stupid’. Duncan Smith made the point that big is not always best when it comes to trade, referencing the UK’s financial services.

Robert Peston had his own high-profile guests with the First Minister of Scotland, Nicola Sturgeon, and leader of the Liberal Democrats, Vince Cable. Sturgeon saw May’s speech as more of a concession that the UK will be worse off after Brexit. Vince Cable said it is possible that the Lib Dems could be involved in a new centre party being formed. Cable rejected tribalism and said that he knows of both Conservative and Labour MPs who are very unhappy at the moment.

John McDonnell appeared on Sunday with Niall Paterson and said Tom Watson should think about his relationship with Max Mosley. He said that although Watson said he was of the opinion Mosely had changed his views from years ago, it appears he has not.

You can make your own canvas for any type of story, campaign or coverage. 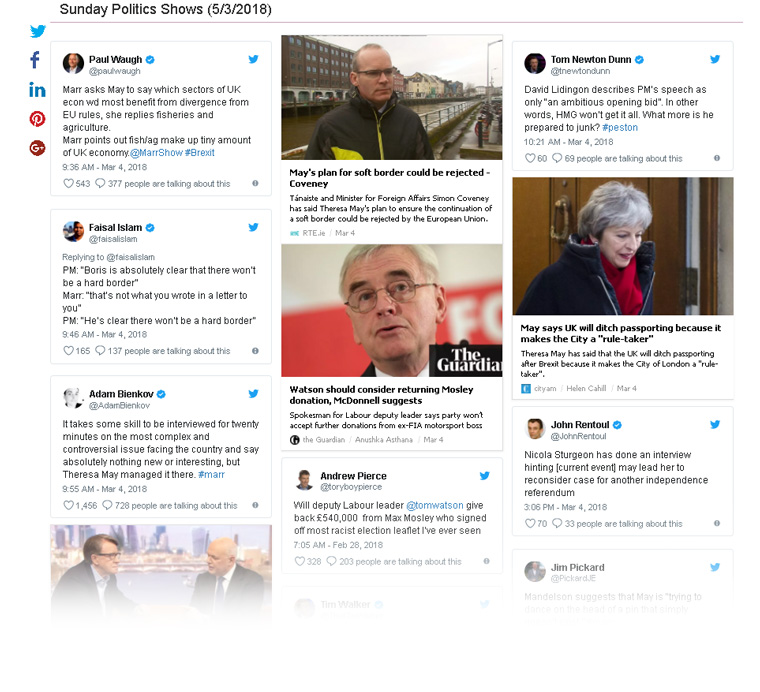