You are here: Home / PR / PR Fail: RBS and NatWest targeted on social media
Previous Back to all Next

Customers took to social media to condemn the Royal Bank of Scotland, which includes NatWest and the Ulster Bank, after payment systems went down between 6:30pm and 9:30pm on ‘Cyber Monday,’ one of the busiest shopping days of the year.

The IT glitch is reportedly the third major failure in 18 months for the group, and the latest to threaten account closures from disgruntled customers who were unable to withdraw cash or make payments.

While banks have issued apologies and extended operation hours to deal with customer grievances, the backlash on social media is irreversible.

Using Cision Social Media, we found that over the past two days the number of mentions of RBS and NatWest on social networking platforms has spiked, undoubtedly for the wrong reasons.

The graph below demonstrates how the number of mentions of RBS on social media accelerated between 8pm and 10pm on Monday, peaking at 9pm with 3,500 posts.

The conversation cloud indicates the words most associated with RBS over the past two days: 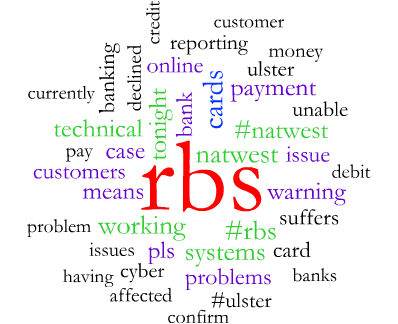 Similarly, for NatWest the number of mentions on social media spiraled between 7pm to 9pm, and peaked at 8,000 posts at 8pm.

NatWest’s conversation cloud in the past two days is a reflection of the complaints raised by customers. 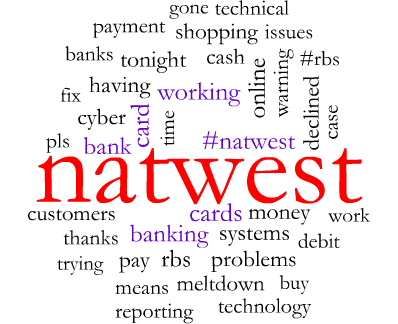