You are here: Home / PR Pulse / PRCA 2019 Digital Report: industry investment in social media is up
Previous Back to all Next 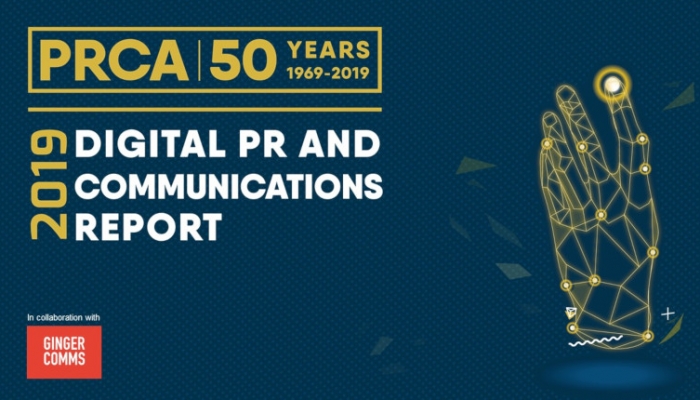 Social is still successful and attracting big budgets, according to the PRCA’s 2019 Digital PR and Communications Report.

Produced in partnership with Ginger Research, PRCA’s digital report shows increased industry investment in social media and digital. The survey of 408 PR professionals across sectors including technology, NGOs, government, and finance and banking found growth in budget assignment for digital tools and tactics as well as a greater confidence in measuring its success for campaigns.

Reasons for keeping up a social media presence for brands has stayed the same as last year – to increase awareness of what they do (86%), drive audience reach (71%) and brand awareness (65%). Spending on digital and social is up this year, with over half of respondents saying their budget has increased over the last 12 months. For future spending, budgets will grow even further for almost half of those surveyed, with 49% say their assigned budget will increase and only 2% predicting less.

Where the budget goes shows what’s working and what isn’t – Search Engine Optimisation (SEO) spend is down (by 10%), while more money is going towards video-based content, up by 4% (text-based is down by 9%).

What clients expect from their PR services shows a different motive, however – 51% expect online press release distribution, 49% digital crisis management, 46% image-based content and 43% social influencer outreach. That importance is being placed in different areas by those providing PR services and those paying for them – one looking to digital engagement, and the other to the more traditional PR tool of press releases – could signal a need for greater communication between client and agency on what is possible when embarking on a campaign (and digital provides many opportunities the press release can’t).

Those still catching up to the potential of digital and social media in-house cited lack of time, staff, education and budget as blocks rather than lack of interest or want. And which social platforms are most popular for those making full use of them in campaigns is probably unsurprising – Twitter comes out on top as most popular for in-house (90%), closely followed by Facebook (81%). Agencies place similar importance on Twitter as a platform (85%) but consider LinkedIn (84%) more useful than Facebook (80%). The popularity of Instagram as a social platform for PR is lowest out of the big four – 67% for agencies and 63% in-house.
Tweeting and Facebooking is second nature for campaigns, but where PR is looking for the future of engagement goes one step beyond to augmented/virtual reality. 32% would like more education on it, 25% on voice/search aps and 24% on chatbots.

Whichever particular digital platforms PR budgets will focus on for campaigns in the coming year, social media is where stories will continue to flourish: ‘No one can argue that digitally relevant content should be the cornerstone of every PR campaign,’ said Ginger Research creative director Ellie Glason of the report findings. ‘It will be fascinating to see how modern digital mediums will evolve, and what new platforms for storytelling will be at our disposal in the near future.’

PRCA Digital Group chairman and Play and Shiny Red managing director Danny Whatmough also sees excitement in where PR will go next with digital: ‘While things move pretty fast in the digital arena, our study has shown year on year that PR professionals across the UK are evolving and developing their skillsets to match changing consumer behaviours, uncovering new opportunities to reach and engage diverse audiences.’

The full report from PRCA and Ginger Research can be found here.