You are here: Home / journalism / Smart content, smart moves? The making of a digital newsroom
Previous Back to all Next

As well as offering fantastic views of the London skyline, the 13th floor of News UK was also the venue for the Digital Editors’ Network #smartDEN event on Tuesday. This was an opportunity to discuss the evolving world of journalism and the newsroom in an increasingly digital age, with a focus on smart content. Alison Gow, editor of the Daily Post, and Dan Owen, digital editor for the Daily Post, spoke about how smart content was being used for its new digital-first newsroom. 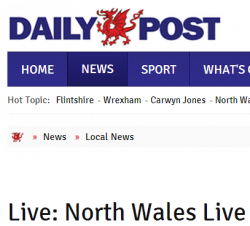 Dan painted a clear picture of where the Daily Post sees the newsroom’s place in the ever changing digital climate, as well some of the problems involved in moving forwards with this vision. His objectives were clear when the switch to a digital focus took place last October; he wanted to create a new type of newsroom with digital at its heart. This was the prototype for Trinity Mirror’s Newsroom 3.0.

It was never going to be a completely smooth move, as change is often met with resistance. The main changes were three-fold: structural, organisational and cultural. Or as Alison said, ‘It was a case of ripping apart the fabric of the newsroom’. This was something she had to do when she took on the role of editor two years ago and was tasked with developing a digital newsroom. The culture of the newsroom was the biggest challenge to overcome. Some people who had been there for a significant period of time had to be introduced to a new way of thinking.

Alison spoke candidly about the concern her team felt, particularly at the prospect of job cuts. The training and learning of new skills, the inclusion of the team in the discussions driving the changes, and of course evidence of success, went a long way in getting journalists to embrace the transformations. Alison honed in on a significant component necessary for the move to digital to work, which was that audience, content and platform still had to come first. Digital also had to enhance the print product, which the Post still values highly.

Two key concepts which kept coming up throughout the event were differentiating content for its specific platform and creating direct relationships with the audience. Dan demonstrated the importance of these ideals in forming the foundations of the breaking news team and breaking news live blog. The live blog provides seven-day coverage of constantly moving news. The personal tone and up-to-date snippets of information distinguish the content from the print product and encourage users to return to the website throughout the day, making it part of the journey and hopefully creating a loyal customer base in the process.

The integration and use of social media is another essential tool in tailoring content to audiences, bringing them to the epicenter of the conversation and becoming contributors themselves. After all, what better way to understand your audience than by directly communicating with them?

The ways in which journalists communicate with audiences has changed in other ways too, according to Dan. It is still essentially about telling stories, though the art of telling stories is no longer just about pictures and words. This is where the Daily Post’s ‘packages’ come into play. Packages consist of multimedia platforms, such as videos, graphics, maps and Storify.

Newsroom 3.0 is just one example of the new type of newsroom. But more than that, it is an example of progression. And progression is what the Digital Editors’ Network was ultimately discussing; how best to use the tools at our disposal and move forward, harnessing information to create smart content and take advantage of the changes that inevitably have to take place.