You are here: Home / Politics / Budget 2021 Speculation: Housing
Previous Back to all Next 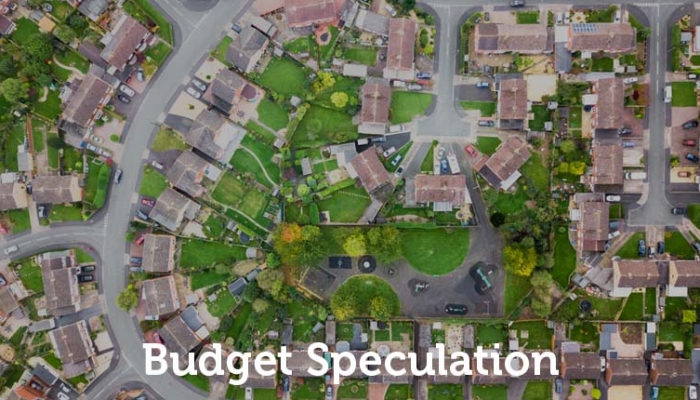 In the run up to next month’s Budget, housing industry bodies have been leading numerous campaigns – from protecting leaseholders from cladding costs, to extending various tax cuts, to accelerating the decarbonisation of buildings.

Here are six policies that could be included in the Chancellor’s statement.

1. Stamp Duty holiday extension
Many in the housing sector are calling for the six-month Stamp Duty holiday to be extended beyond the current 31 March expiry date. Both buyers and sellers have called for an extension to the six-month tax break, introduced to support the property market during the pandemic. Experts have predicted that the end of the scheme could see house prices decrease significantly. Other than setting the end of the Stamp Duty holiday to another date, the Chancellor could choose to introduce exemptions for buyers already at a certain stage along the process, or permanently maintain the threshold for eligibility at properties over £500,000.

2. Property tax
There have been reports that Stamp Duty could be scrapped altogether, along with council tax, to be replaced with a new property value tax. This could appear in the form of a proportional property tax – a levy that homeowners would have to pay each year on the value of their property. For landlords with more than one residential property, the tax would apply for each property owned. There have been suggestions that the money raised from the levy could be split between the Treasury and the local authority.

Housing Secretary Robert Jenrick has already announced that developers seeking permission to develop certain high-rise buildings in England will have to pay a ‘Gateway 2’ developer levy. In addition to this, a new tax will be introduced for the UK residential property development sector, expected to raise at least £2bn over a decade to go towards cladding remediation costs. Details of this will be the subject of a consultation paper, which could be put forward at the Budget.

3. Domestic reverse charge
The ‘domestic reverse charge’ change means companies in the construction supply chain will no longer receive their 20% VAT payment when they submit bills. The VAT cash will instead be paid direct to HMRC by the customer receiving the service, who will reclaim it in the normal way.

Despite the changes coming into effect on 1 March, industry bodies, such as the Construction Leadership Council and the Federation of Master Builders (FMB) are hoping for a last-minute change of plan ahead of the Budget, warning that more than 150,000 construction companies will experience a 20% drop in cash flow as a result. In a letter to the Chancellor, Chairman of the Construction Leadership Council Andy Mitchell argued that the policy ‘risks reversing any recovery industry has made from Covid-19 and will limit the scope for protecting and creating jobs across the UK’. An Early Day Motion expressing concern over the Treasury’s decision to go ahead with the policy was tabled last week by SNP MP Kirsten Oswald.

4. National Retrofit Strategy
There have been numerous calls from industry bodies, including the National Housing Federation and the FMB, for a National Retrofit Strategy. Decarbonising homes and buildings is a vital step in achieving net zero emissions by 2050. In its Energy White Paper released in December, the Government said a programme for retrofitting homes to improve energy efficiency will be introduced. This could happen at the Budget.

5. Another extension to the Green Homes Grant
The Green Homes Grant has already been extended once, until March 2022, however, poor uptake of the scheme – described as complex and difficult to access – has led the Government to cut funding by £1.5bn from April. Chair of the Environmental Audit Committee Philip Dunne argued that unless the scheme is further extended, it will fail to meet its ambitions.

6. Extension to the Universal Credit uplift
Universal Credit claimants have been receiving a weekly £20 rise during the coronavirus pandemic. The Government is under increased pressure to extend the rise past 31 March, however, speaking on the Andrew Marr Show, Foreign Secretary Dominic Raab said it was a ‘temporary measure’ and that the Budget would set out support ‘in the round’.

Instead of extending the rise, there have been numerous reports in the media that the Chancellor is contemplating offering Universal Credit claimants a one-off payment of £500. However, this was rejected by Work and Pensions Secretary Thérèse Coffey.