You are here: Home / PR Pulse / State of the Profession in 2020? There’s still a way to go with divers...
Previous Back to all Next 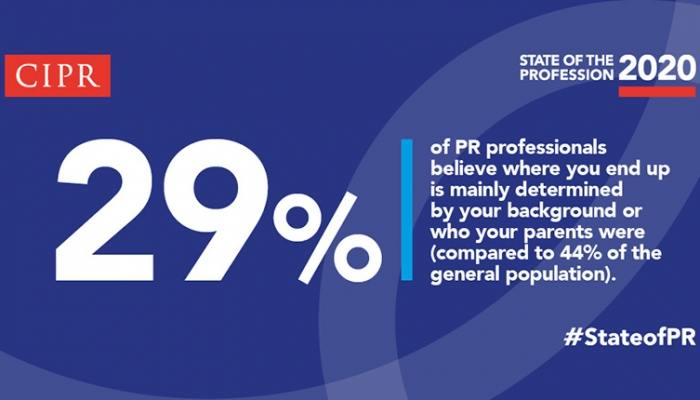 Findings from CIPR’s State of the Profession 2020 show just how far the PR industry has to go when it comes to reflecting the same values as its audience and clientele and improving on the diversity of its workforce.

Class continues to be an issue in 2020, with the disconnect in views between those working in PR and the general public particularly obvious. 40% of PRs believe a person’s background has no impact on where they end up in life, where 60% of the public hold this view.

Especially interesting from the results are disconnects within PR teams themselves: the higher the salary of a PR, the less likely they are to believe background is what will determine success – instead, believing that hard work and talent gives everybody a fair chance. Those who earn less, however, are less likely to believe in fair chances, seeing background as far more powerful when it comes to career advancement.

This is particularly concerning because change needed to increase the diversity of the sector needs to come from those with higher salaries. For that to happen, first and foremost the issues need to be acknowledged and accepted.

On gender, results are mixed. The gender pay gap has lowered by 46% since 2018 (the gap between men and women now standing at £3,658), and among those with four years of experience, women are, on average, earning £1,687 more than men. However, with experience, this changes: female directors, partners, and managing directors earn over £19,000 less than their male counterparts.

Unsurprisingly, inclusivity when it comes to race and sexuality continues to be a glaring problem in the profession. More than nine in ten practitioners are white – according to the report, the PR industry is continuing to fail with making substantial progress on improving ethnic diversity on teams and in boardrooms. 86% of practitioners this year identified as heterosexual, and fewer than one in ten identifying as lesbian, gay, bisexual or asexual.

‘This year’s State of the Profession survey reveals little or slow progress in many of the challenges that have long been identified – most notably in the lack of diversity within the profession – but some positive developments in other areas,’ said CIPR’s 2020 president Jenni Field of the results.

‘We’re not there yet, and there is still much to be done.’

Read more from CIPR’s State of the Profession 2020 here.