You are here: Home / PR / Three appointments at Umpf
Previous Back to all Next 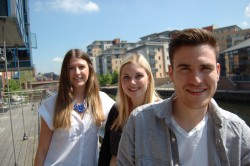 Matthew has joined as an account manager from Leeds-based agency Lucre. He has previously worked with Jet2.com, Hallmark, University of Leeds and Ronseal.

Amy has also joined as an account manager. She was head of the Online PR team at Epiphany, where she worked on campaigns for Debenhams, Waterstones, Savills and Kempinski Hotels.

Ellie has been appointed senior account executive. Ellie has come from Sheffield PR agency MK Things Happen, where she worked on accounts such as McCain Foods GB, Napoleons Casinos & Restaurants and Off the Shelf Festival of Words.

Adrian Johnson, founder and MD, said: ‘Matt, Amy and Ellie have been taken on to look after a wealth of new client wins for Umpf, including an international social media contract for Park Inn by Radisson.’

The week in PR: a roundup of the top stories