You are here: Home / PR Pulse / Time for a blogging trade association?
Previous Back to all Next 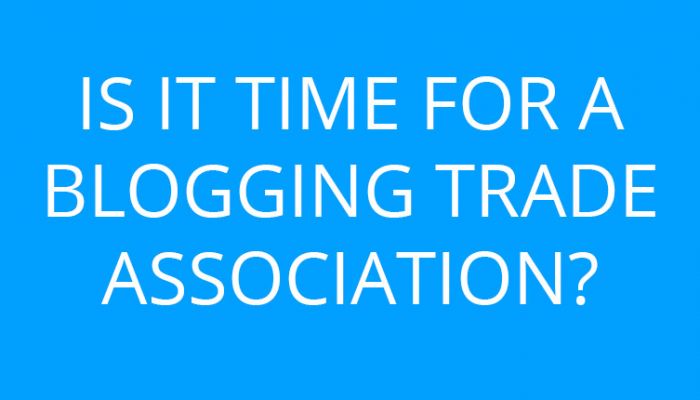 This is a guest post from John Adams, blogger at DadblogUK.com, about the need for a blog association. Have your own opinions about this? Want to write a guest post? Email Jake O’Neill or tweet us @Vuelio.

There’s been a fascinating conversation on Twitter recently. It was sparked off by a post on the Dad v World blog.

While David, the author, was questioning the merits of being known as a dad blogger, it created a lot of chat about changes in the blogging world. Some questioned the way blogging has become monetised, others felt it was acceptable, others sat on the fence but acknowledged blogging has become more competitive over recent years.

I launched my blog, Dadbloguk.com, six years ago. In that time, I have noticed an increasing number of people have turned blogging, not to mention vlogging and Instagramming, into an occupation. For some time now, I’ve been wondering if we’ve reached a point where some form of trade association for bloggers would be a good idea.

In fact, I’m not the only person to have had this idea. A short while ago I was quietly approached by what I’ll euphemistically call an interested party. I was asked whether a trade body was needed for the blogging community.

The approach was very timely. I had, just days previously, joined the Federation of Small Businesses. The FSB is a great institution that offers SMES some amazing services. You can call upon it for crisis communications help, it’s presently offering members workshops on the GDPR, it will help you out if you find yourself on the wrong end of a tax investigation by HMRC and so on.

It doesn’t, however, provide specific, targeted services for bloggers. Blogging is specialism that requires special skills and knowledge and, at this point in time, bloggers have no body to represent their interests.

Here are a few issues I think a trade body could help with:

Continuous professional development
We all need to know about the GDPR. We all need to keep up with the latest SEO developments and learn how to use social media channels effectively. A trade body could organise events and workshops to help its members keep their skills up to date.

Late payment assistance
A trade body could help bloggers when invoices go unpaid. It’s easy to ignore one blogger chasing up an invoice. A trade body, however, would be much more powerful and repeat offenders would find it harder to do business with reputable bloggers.

Code of Conduct
This, I feel, could massively help both bloggers and the PR industry. Let’s just take the issue of paid-for content as an example.

We’re all supposed to be playing on a level field and declaring paid-for content. Yet we all know that not everyone follows the rules.

Members of this yet-to-be-established trade body could abide by a code of conduct requiring them to declare paid-for content in line with Advertising Standards Authority rules, just as the print industry has done for years. This would make life much more difficult for those unscrupulous PR and SEO agencies that frequently ask bloggers to host paid-for content without declaring it or pay tiny amounts in return for bloggers taking part in link building schemes.

Think also of those bloggers who ask for and receive expensive review items and then never do anything with them. This harms the reputation of the blogging industry. If bloggers signed up to a code of conduct, it would give our colleagues in the PR industry some comfort that we were going to produce the goods.

Representation at Government level
Yes, yes, I know this sounds very boring, but I think this is one of the most compelling reasons for the establishment of a trade association for bloggers. The Brexit talks are a fantastic way to demonstrate this.

Representatives from the motoring, fishing, farming and financial industries have been consulted as part of the Brexit talks. As bloggers, we need standardised technological protocols and data protection regulations with the EU and beyond. Without it, it would be very difficult for our blogs to operate.

Who is lobbying for bloggers’ interests at this point in time, to ensure this happens? I’ll tell you who: no one.

Press regulation is another issue. At one point it looked like bloggers were going to fall under the remit of the press regulator. Thankfully it didn’t happen, but there was no trade body in place to argue our case.

Limits of any trade body
While a trade body would be an amazing development, I think it needs a clear remit. It shouldn’t be a union, I don’t think it should negotiate rates of pay. Us bloggers are probably a little too individualistic to want to be constrained by union rules!

Challenges of setting up any trade body
I have heard it said that it would be ‘too difficult’ to set up a trade body for bloggers. I think that’s very defeatist.

The closest organisation I can think of is the National Union of Journalists. The NUJ represents news reporters, features writers, trade journalists, broadcast journalists, freelancers, staff writers, photographers, sub-editors, editors, art critics, political correspondents and so on.  Yes, okay, it’s a union so not quite the same thing as a trade body, but if the NUJ is such a broad church, then a blogging trade association could represent fashion bloggers, news podcasters, travel Instagrammers, mummy and daddy bloggers and so on.

I imagine there would be some resistance from people who either make very small amounts of money from blogging or who do it solely as a hobby. I can see ways around this, but there are very few occupations where you don’t get professionals and amateurs rubbing along nicely side by side.

Often, it’s a career path: you start off as a hobbyist and become professional. Blogging is no different.

Blogging is no longer ‘new’ media. It is established media and no properly organised media campaign takes place without the involvement of bloggers. A trade organisation would help give us the respectability we deserve but frequently don’t get.

There could be different tiers of membership depending on income, age of blog etc. maybe those blogging for the love of it could receive associate membership. Who knows, but there are possibilities to explore.

Final thoughts
Setting up a trade body for bloggers would have its challenges. It would definitely have its opponents.

I personally feel that the industry has developed to a point where it would be no bad thing. It would provide some security and protection both for bloggers and to the people we work with in the PR and SEO agencies. I think there’s real potential for it to drive up standards and to make it a recognised and understood occupation.

What do you think? Would you be tempted to join a blogging trade body? Do you think it could drive up standards? Would it bring some respectability to the blogging world?

One final thought, if I ever saw an amateur firefighter, I’d probably ask for a selfie and post it to Instagram. I am, after all, a blogger and, trade body or not, that’s the kind of thing we do.