You are here: Home / Communications / Twitter analysis show greater support for Yes vote as Scotland decides
Previous Back to all Next 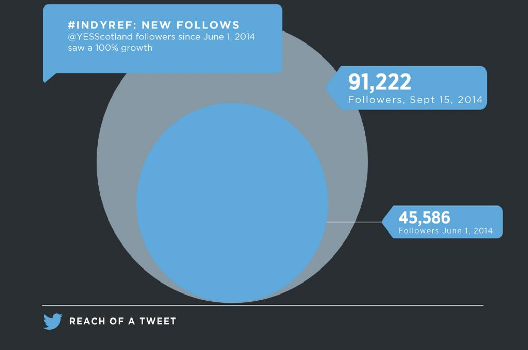 The role of Twitter has been crucial in communications surrounding the Scottish Referendum debate and if the analysis of the hundreds and millions of tweets #IndyRef generated on the microblogging platform is anything to go by, the Yes vote seems to have overtaken the No in the year that has led up to this date when Scotland decides its fate.

According to the Twitter Government and Politics team that tracks tweets and mentions on the platform for civic engagement purposes, there  have been more than 5.8m tweets using the #IndyRef hashtag in the past year – and 2.6m (45%) of those have been sent in the past 30 days.

The analysis which took into consideration the official Twitter accounts related to the debate, found a 100% increase in number of followers for @YesScotland which as of yesterday (when this data was published) was at 96,051 as compared with a 68% increase for @UK_Together account that stood at 41,297 followers.

Moreover the #VoteYes hashtag outstripped the other popular referendum hashtags such as #BetterTogether, #NoThanks and #YesScotland with 670,784 mentions on Twitter.

Below are the findings as reported by Twitter Government @Gov:

The most popular referendum hashtags that have been used on Twitter over the last 30 days include:

Since June 1, accounts related to the debate have also been gathering new followers as the conversation gains momentum. There has been:

As we enter the final stages of #IndyRef, here are two charts showing follower growth since June 1 for both campaigns pic.twitter.com/S51UMQH6Zn

Meanwhile, The Drum reported today that on Facebook, the Yes Campaign page  has received 258,000 likes, compared with only 182,000 for the No campaign, while the pro-union camp saw 1.96 million interactions relating to its Better Together campaign, and the Yes side had 2.05 million.

But whatever the results of the Scottish referendum may be today, its a big YES for social media on the level of activity, engagement and maturity these networks have demonstrated over the year in this political debate. 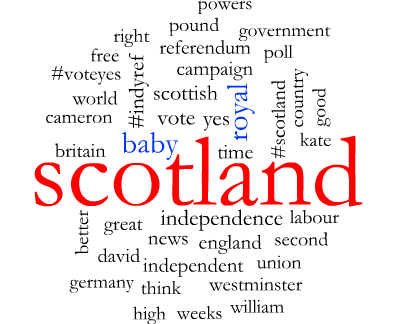 Scottish Referendum and a baby: A Cision Social Media analysis