You are here: Home / PR Pulse / UK Black Comms Network event: One Step Forward Two Steps Black
Previous Back to all Next 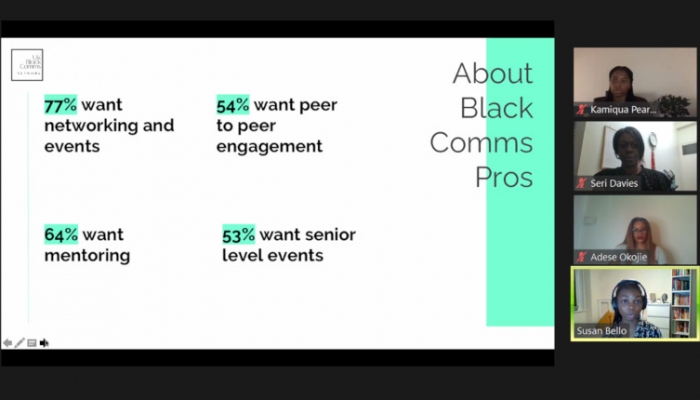 Moderated by the network’s head of PR Addy Frederick, the panel discussing the research and what it means for the communications industry included Opinium Research’s Susan Bello, Black Woman in HR’s Adesse Okojie, Birchwood Knight’s Seri Davies and COLDR’s Kamiqua Pearce, founder and CEO of the UK Black Comms Network.

‘We saw lots of companies speak out against racism this year, relating to the murder of George Floyd,’ said Seri Davies when talking about the work that still needs to be done for PR and comms to be inclusive. ‘Now the lights and cameras are away, what are you doing in your organisation to create an inclusive environment for everyone? A workplace where people feel safe to bring themselves and their opinions to work?’

In the first research of its kind for the PR industry, the report gathered data as well as one-to-one interviews with professionals working across the UK, across a mix of age groups and seniority levels, both agency and in-house level.

‘I haven’t been promoted in five years despite receiving continuous verbal praise for my contributions,’ answers one survey respondent. ‘I am also every aware of who in the team has been promoted or who has roles created for them. None of them look like me.’

For what senior management, HR and recruitment teams need to do to break down their barriers keeping Black PR and comms professionals from promotion and leadership roles, organisations need to go further than tokenistic ‘Hiring Black’ and make real changes to company culture, believes Kamiqua Pearce.

‘We all talk to each other; the Black community within PR is very small. We know what’s going on. You’ve got to be humble, honest and open. People are much more confident to ask what is in place.’

Seri saw the problems beginning right at the start of the hiring process: ‘Recent PRCA research shows less than 1% in the industry are Black – that in itself is a barrier. There’s likely to only be one Black person on shortlists. Sometimes feedback from interviewers can be ‘this person was too nice’ or ‘they lacked gravitas’ – a feeling that Black people can’t hold senior roles because they don’t look like people within the business, or their stakeholders.’

‘What needs to be transparent are those active measures that are being taken,’ added Adesse Okojie. ‘We need that change now, we need those black faces and voices at the table.’

Founded in July of this year, the UK Black Comms Network is now open for membership, with a mission to increase the number and seniority of PR professionals of African or Caribbean heritage in the UK PR and communications industry and the ambition of providing a space for professionals to make change in the industry. But with all the advice for fellow practitioners from the panel on pushing forward, the onus also remains on the industry and its existing power hierarchies to make change.

‘This has been an interesting year,’ said Kamiqua. ‘More people are aware that racism is a thing that happens. It’s not going to be solved by hiring a chief of diversity. You might have created a culture you think is great, but someone could join and suddenly it’s not a good place for Black people again. It needs to be baked into your overall inclusion plan so the commitment is year-round’.

‘We united in our challenges this year,’ said Addy Frederick of the UK Black Comms Network’s foundation. ‘There is an opportunity here to be united in more positive things, so that more of us are here, and more of us stay in this industry’.

The UK Black Comms Network is now officially open for membership – find out more here on the website.