You are here: Home / PR / UKIP appoints Patrick O’Flynn of The Daily Express as comms director
Previous Back to all Next 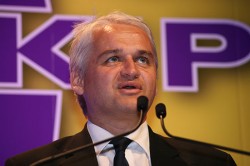 UK Independence Party (UKIP) has appointed Patrick O’Flynn of The Daily Express, as its new director of communications.

Patrick will leave his job of eight years as the chief political commentator at the newspaper in February to help oversee UKIP’s campaign for the 2014 European and UK local elections, according to the official press release.

Patrick is also standing for the party in the European elections as the lead MEP candidate in the East of England constituency.

UKIP leader Nigel Farage was quoted saying: ‘UKIP has an increasingly strong team in place to take the party through the elections in May, which could prove to be some of the most exciting in the history of UK politics. We are aiming to top the poll in the European Elections and cause an earthquake in British politics. I have known Patrick for a long time and was delighted when he showed his support for the party by standing as one of the most high profile, high calibre MEP candidates for UKIP in May. I am thrilled that he has now agreed to steer the team through the elections this year in this new role and am excited about all the party will gain from his insight and experience.’

Patrick added: ‘UKIP’s opponents, the LibLabCon political class, may wish to portray the party in a wholly inaccurate light but it is our job to push what we really offer to the general public. It is inspiring to see how many people are already responding to us in big numbers. I am confident that we can take it further in the European elections in May and then onwards to the General Elections next year.

I hope my background and experience as a Fleet Street political commentator will help UKIP demonstrate how it is the true voice of opposition in British politics.’