You are here: Home / Communications / World Cup 2014: the biggest lesson in marketing real time
Previous Back to all Next 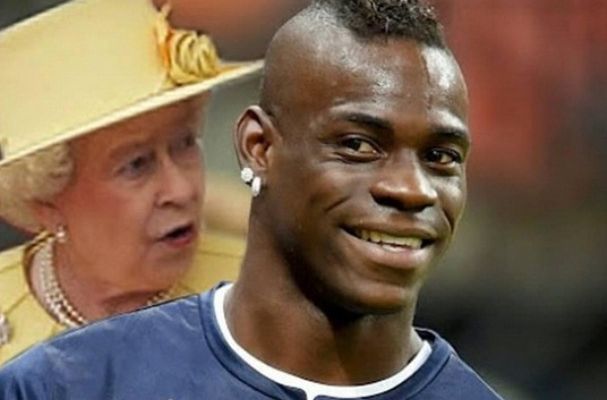 As the World Cup moves into the deciding phase, the action has moved off-the-pitch and into the hands of fans and brands alike, as they set new tweeting and live streaming records, capturing it all real time– kicks, bites, kisses et al.

While sponsors Adidas and Nike are unashamedly battling for social media dominance, the tournament has seen other, less-sporty brands jump the World Cup bandwagon, which is poised to be the most “social” event in history.

Real-time marketing is the name of this game as funny, cheeky and even offensive responses have been posted and in some cases, later deleted from the worldcuposphere.

The World Cup has  to be the biggest lesson in real-time marketing for brands, a few of which are struggling on the thin line between a quip and a gaffe.

Here’s our pick of some of the best World Cup retorts making the news, for reasons good and bad:

Thick in the middle of controversy, even as I write this, is Dutch airline KLM that tweeted a picture which didn’t go down well on social media, of an airport departure sign, after Holland beat Mexico on Sunday night. The accompanying tweet read: ‘Adios Amigos #NEDMEX’ 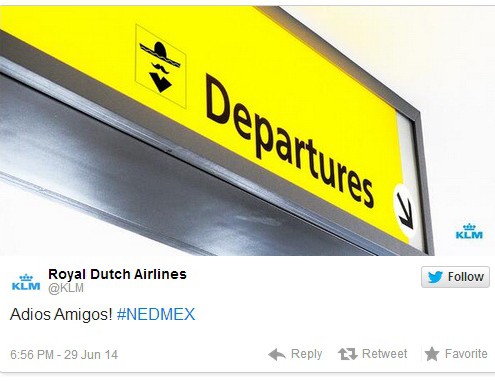 This is the second airline that was forced to delete a tweet and issue an apology for a message issued in “poor taste”. Delta Airlines tweeted the following picture in celebration of America’s 2-1 victory over Ghana in the World Cup…. 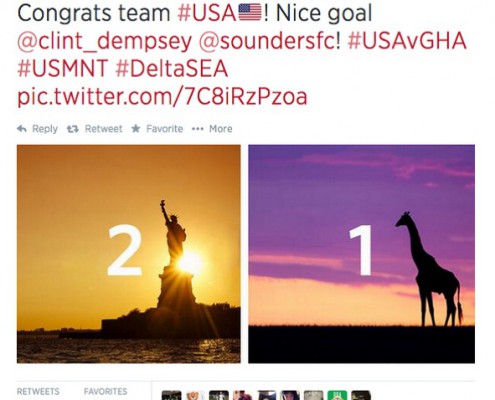 ….only to realise very quickly that there are no giraffes in Ghana.

It was thanks to Luis Suárez, accused of biting his opponent Giorgio Chiellini’s shoulder in the Italy v. Uruguay match on 24 June, that brands truly got a taste for real-time. Unlikely candidates such as Snickers, Nando’s, Listerine, Trident and Specssavers, along with many others, reacted with spoofs and jokes on the incident that were an instant hit online. 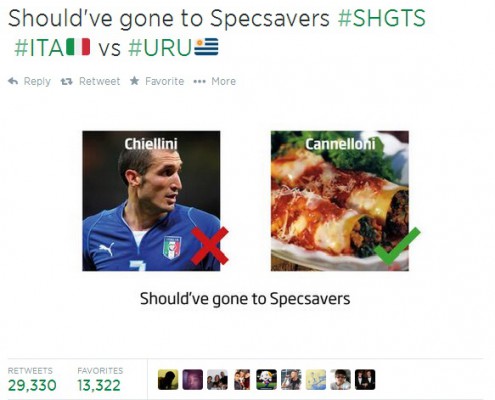 And as Mario Balotelli’s cheeky proposal on Twitter (‘I want a kiss from the Queen if I keep England’s World Cup hopes alive’) went viral, so did the the witty jabs. Here’s one from Ladbrokes:

KISS AND TELLI: Anything for you @FinallyMario, if you do us a favour Queenie will pucker up! #ITAvsCRC #TheBeliever pic.twitter.com/GAY8GIqRDP

Meanwhile, the following example by easy Jet was published in print, but found its way on social media and into conversations.