You are here: Home / media analysis / Yahoo buys Tumblr: reactions
Previous Back to all Next

Yahoo has bought blogging giant Tumblr for a reported $1.1bn. In her biggest acquisition since taking over, Yahoo’s chief executive Marissa Mayer has promised ‘not to screw it up’. The internet seems divided on what this means for users and Tumblr’s future.

The site boasts 109.5m blogs with 51.1bn posts, but according to Forbes Tumblr’s 2012 revenue was just $13m. Advertising is likely to be one of the first developments, with Yahoo hoping to capitalise on 900 posts per second and 24bn minutes spent on the site each month.

The story is big news for the digital classes and using Cision Social media we can see the point that the news broke on Sunday 19 May: 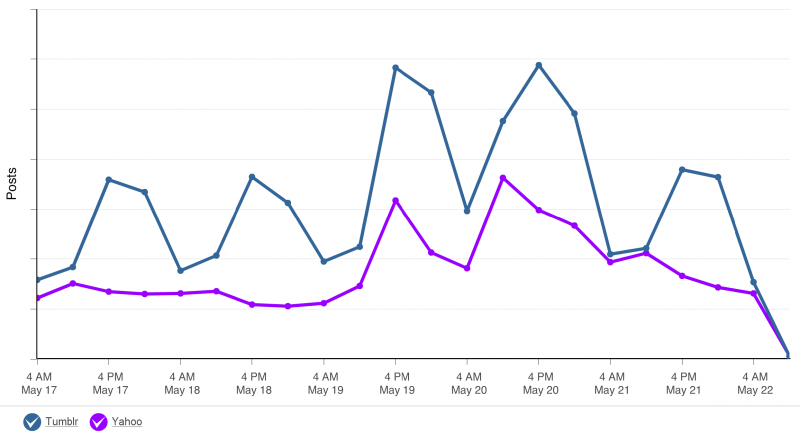 Tumblr typically gets thousands of mentions a day with people linking blogs hosted by the site, but the spike is still clear. Not all of the mentions were positive, with one of the more polite negative tweets coming from Comedy Central’s Indecision handle:

Congratulations to Yahoo for buying Tumblr for $1.1 billion. Now all they need to do is burn it to the ground.

The blogging community are unsurprisingly vocal about the acquisition. Blogs profiled in CisionPoint’s Media Database have been discussing the pros and cons of the deal.

The usually mobile-focused Phone Reviews ran a story titled ‘Yahoo Swallows up Tumblr and causes a stir’, comparing the move to other acquisitions in the mobile tech world. Discussing the possible negatives of the deal, Phone Reviews posed the question: ‘Are you unhappy about Yahoo purchasing Tumblr?’ Phone Reviews’ inclusion of the story highlights Tumblr’s importance to mobile, with Marissa Mayer claiming more than half of the platform’s users are using the mobile app an average of seven times a day.

Geeky Gadgets went with ‘Tumblr Users Abandoning Ship’, covering WordPress founder Matt Mullenweg’s claim that the rate of people switching from Tumblr to WordPress increased from 500 posts an hour to 72,000. This huge spike is seen as a direct response to Yahoo’s purchase.

The business-owner platform Smarta reports on the Tumblr timeline, tracking the major stages of the website’s development from 2006 to today. The corporate blog uses Tumblr’s successes to promote its own area of expertise.

Social Go demonstrates an understanding of Tumblr users, describing the situation as: ‘One of those moments when hipsters feel their favourite band has been discovered by the mainstream, and thus devalues it in every way, even when in fact, it leads to a lot more possibilities with such a strong backer’.

Jon Silk describes Yahoo’s reputation as that of a ‘ginormous web dinosaur’, which eats companies, digests them and leaves a trial of ‘huge dinosaur droppings behind’. The analogy runs to the end of his post where he describes the deal either working and being the making of Yahoo or not working, in which case: ‘The most well-known internet dinosaur might have 100 million people trying to hunt it down and kill it’.

There is optimism in Marissa Mayer’s capabilities and reports that Tumblr could boost Yahoo’s revenues as early as 2014. What Yahoo’s purchase means to the Tumblr users is yet to be seen and the coming months of subtle changes and developments will likely shape the way the new owners are received. While Tumblr is currently huge, big sites have failed in the past; Yahoo’s own GeoCities is unfortunately a fair example.

The Graph was made with data from Cision Social Media via CisionPoint. All of the blogs appear in the CisionPoint Media Database.