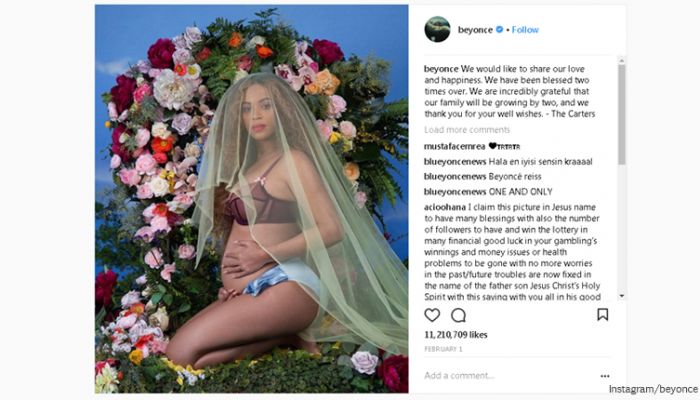 Instagram has cemented its place at the heart of visual media. It’s now possible to be a star on Instagram and nowhere else; brands and companies will pay good money for influential posts; and some people will buy fraudulent followers in order to get to the top. Instagram has also been accused of dragging bloggers away from their blogs, as new forms of media ‘entertainment’ develop every day.

But what are the top hashtags, most-liked posts and most-followed celebrities? Instagram has trawled its data to put together the list of lists and deliver all the 2017 info you need about Instagram. And, who knows, maybe 2018 will see you become an Instagram star.

Beyoncé, Cristiano Ronaldo and Selena Gomez dominate the top 10. In fact, no one else managed to make the list (which may be sad news for Ariana Grande, who has more followers than Beyoncé). All three of the top posts were related, Beyoncé and Ronaldo connected by birth, and Ronaldo and Gomez related by hospital:

We would like to share our love and happiness. We have been blessed two times over. We are incredibly grateful that our family will be growing by two, and we thank you for your well wishes. – The Carters

I’m very aware some of my fans had noticed I was laying low for part of the summer and questioning why I wasn’t promoting my new music, which I was extremely proud of. So I found out I needed to get a kidney transplant due to my Lupus and was recovering. It was what I needed to do for my overall health. I honestly look forward to sharing with you, soon my journey through these past several months as I have always wanted to do with you. Until then I want to publicly thank my family and incredible team of doctors for everything they have done for me prior to and post-surgery. And finally, there aren’t words to describe how I can possibly thank my beautiful friend Francia Raisa. She gave me the ultimate gift and sacrifice by donating her kidney to me. I am incredibly blessed. I love you so much sis. Lupus continues to be very misunderstood but progress is being made. For more information regarding Lupus please go to the Lupus Research Alliance website: www.lupusresearch.org/ -by grace through faith

Ronaldo and Gomez also performed well when it came to most-liked celebrity videos of the year, but Beyoncé didn’t make the cut. Instead, the footballer and singer are joined by Leo messi and Emilia Clarke – though the latter only managed tenth place.

When you need a nap during meet n greets. Wish that was a real thing but that’s why I adore my littles. I hope I could make a few of you smile today. Thank you again @coach I can’t believe my bag is finally out. Or that I even designed a bag?!

The top hashtags of 2017 were dominated by visual or positive words, though how people managed to use them without falling foul of the shadow ban remains a mystery:

And a list that’s making headlines is the most Instagrammed cities. While you’d expect Western metropolises to dominate, the list has some surprises. Feel free to insert your own ‘Russian bot joke’ for number two:

Keep your eyes out for more Instagram data coming to the Vuelio blog soon.

If you’d like to monitor Instagram and find success on the social platform, get in touch to find out more about our social media monitoring.