You are here: Home / Politics / 2020: The new political landscape
Previous Back to all Next 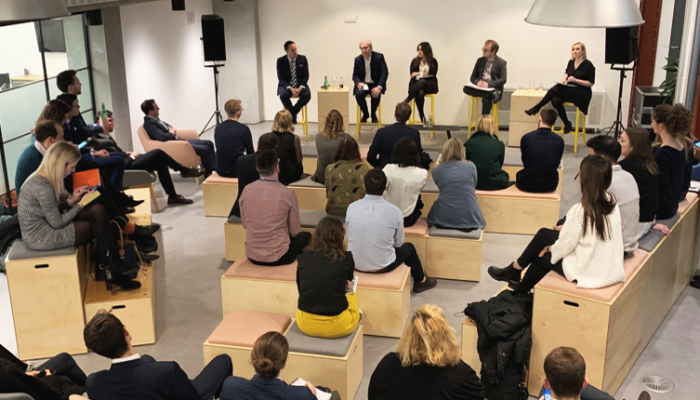 Vuelio’s first political event of 2020 was attended by 60 public affairs and comms professionals and saw a insightful discussion of the current political landscape, following the recent general election victory that saw the Conservatives rewarded with the largest House of Commons majority since Margaret Thatcher in 1987.

Gavin Freeguard, programme director for digital, data and transparency at the Institute for Government, reflected that 2019 was a significant year in British politics with more MPs changing their party allegiance than any time since 1886 as well as a change in Prime Minister in July as Theresa May was succeeded by Boris Johnson and numerous lost Brexit votes, prorogation of parliament overturned by the Supreme Court and then the General Election itself after MPs eventually agreed to support one by the two thirds majority still required under the Fixed-term Parliaments Act.

Gavin added that a more settled political landscape would be widely seen as a positive change following a tumultuous few years. He said that the importance of data would be significant in the years ahead and public perception of this would vary depending if it was for public benefit to society or whether personal data was being used to target messaging to voters, which is likely to be far less popular.

Giles Kenningham, a former head of Press at Number 10 Downing Street and the founder of Trafalgar Strategy, explained that the circumstances of the 2019 election were not going to be repeated so it was a one-off election that Boris Johnson’s campaign team used to great effect. A significant public desire to ‘get Brexit done’ was crucial but will be settled by the next election and the substantial anti Jeremy Corbyn sentiment in much of the country including in Labour’s heartlands will also not be repeated once Labour elects its new leader. Giles acknowledged the front runner, Keir Starmer, could have a ‘Kinnock effect’ on the Labour party, not winning power outright but getting the party in a better shape to be able to win in 10 years’ time

He described 2020 as a ‘brave new world’ and added that the Government has a brief window now that it doesn’t need to let the 24-hour news media dictate the pace of political events. He added that if the PM failed to agree an EU trade deal by the end of 2020 and left the transition period on WTO rules, that it would be ‘problematic’ for the Government and for Boris Johnson himself: ‘there are reputational issues there’.

Dr Stuart Thomson, head of public affairs at BDB Pitmans said it was reassuring for the public affairs sector that the UK now has a Government ‘that can-do stuff’. He argued that despite claims that the election winning Conservative manifesto was light on policy detail, he said there was actually a significant amount for the Government to deliver on given the tight timeframes on things like infrastructure before the Government will need to head back to the polls in 2024.

Saskia Perriard-Abdoh, psychological government programme lead at the British Psychological Society said that a lot of assumptions held by individual voters about why they vote the way they do were challenged in the 2019 election, which saw the political chess board completely reset. She urged campaigners to engage with policymakers as people, given how much people move from role to role within Government. She also added that the Government has a very short window of three to four years before voters will revert to being less engaged and ‘go back to thinking politics and policy is not for them’.

Speakers also engaged in a lively Q&A with the audience, covering social media, campaigning and the change in representation of the ‘red wall’ of northern, midlands and Welsh constituencies, which largely fell to the Conservatives in the General election.