You are here: Home / PR Pulse / Award-winning campaigns webinar: Insight and engagement are key elements...
Previous Back to all Next 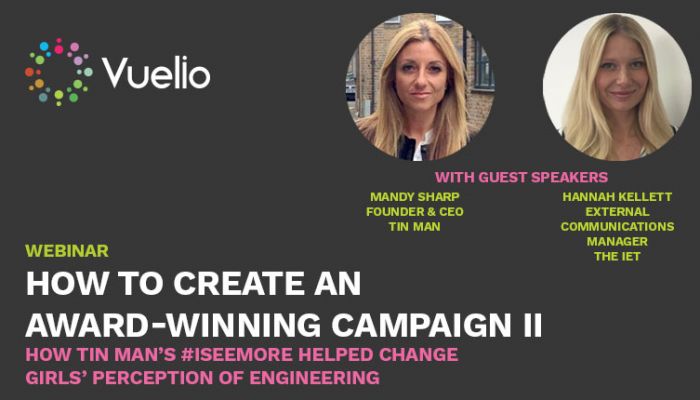 Clear insight into your target audiences and ensuring you have the ability to engage them with your core messages are essential elements in successful campaigns, said Mandy Sharp, founder and CEO of creative PR agency Tin Man and Hannah Kellett, external communications manager at The Institution of Engineering and Technology (IET), in our recent webinar on Award-winning Campaigns.

In the webinar, Sharp and Kellett explained the success of the 2017 #ISeeMore campaign. The campaign was a digital and social-led campaign aimed at encouraging more people, particularly girls and teenagers, to consider engineering as a career. Impressive results, including the finding that they raised the percentage of 9-12 year-olds considering engineering as a career from 31% to 78%, has meant that not only was The IET happy with the campaign and has renewed Tin Man’s services for 2018, but #ISeeMore has also picked up a number of awards, including winning the STEM campaign category at the CIPR’s Excellence Awards.

Here are four elements that make an award-winning campaign:

The power of influencers
‘Young people believe what they say and they follow them for a reason’, said Kellett who acknowledged the importance of influencers, such as Lauren Platt, the presenter and singer, to the campaign. Five YouTube and Instagram influencers were chosen and the idea was that they would create content after going behind the scenes to find out more about the engineering behind popular brands, such as Twitter, Shazam and The Harry Potter Studio Tour.

These are not the only influencers that are important for young people, of course. Kellett added: ‘We have to make sure we are targeting parents too, as they are young kids’ biggest influences.’

Emotional engagement is key
‘We had to engage tweens and teens emotionally about engineering’, said Sharp. The idea was that lots of the brands teens engage with on a daily basis have engineering at their heart. ‘We wanted to talk to teenagers in a way that resonates with them.’

This also meant that the campaign did not just involve influencers finding out about engineering, it wanted to get ‘kids to engage and experience it for themselves’. In partnership with Cadburys/Mondelez, children were invited to ‘engineer’ their own chocolate bar in a competition with more than 200 entries. The winning design, selected by judges including Andy Smyth, engineer and GBBO star, was the Rocket Fuel chocolate bar.

Build on past success
The IET has been running an annual Engineering Open House Day ‘to showcase the really cool’ aspects of engineering but the 2017 campaign saw a host of new venues – a total of 44 – and more than 3,000 attendees across the UK. ‘Watch this space,’ said Sharp as the IET’s new campaign launches later this week (3 August).

Apart from ensuring a successful campaign, Sharp was asked – considering its award-winning status – what makes an award-winning entry. ‘Make your entries interesting to read,’ she said. ‘You have got to make them engaging and, as a judge, you read hundreds of entries. You need to explain the insight and reasoning behind the campaign and explain the background of why you did it. You need to do something interesting and creative, and, of course, share some results.’

Know your budget
One of the most popular questions from the webinar asked how much the budget was and how it broke down into each element. A year-long campaign of this size can be delivered for under £100k. Looking at specific elements, you can expect to pay vloggers between £1-4k each (but this will depend on target reach, how long you want the videos promoted for, etc). Commissioning research to give stories newsworthy results can cost anything between £3k-7k.  Working with talent can come with a price tag too – this heavily depends on who they are and how close they are to the cause. Post-campaign evaluation is a must, especially for Awards submissions, and this can cost anything in the region of £1-5k, depending again on whether you need to commission a survey or can build an evaluation process into an event.

If you would like to work with influencers, bloggers or vloggers, check out the Vuelio Influencer Database. The recording of this webinar will be available next week.