You are here: Home / PR Pulse / Beano accuses Jacob Rees-Mogg of IP infringement
Previous Back to all Next 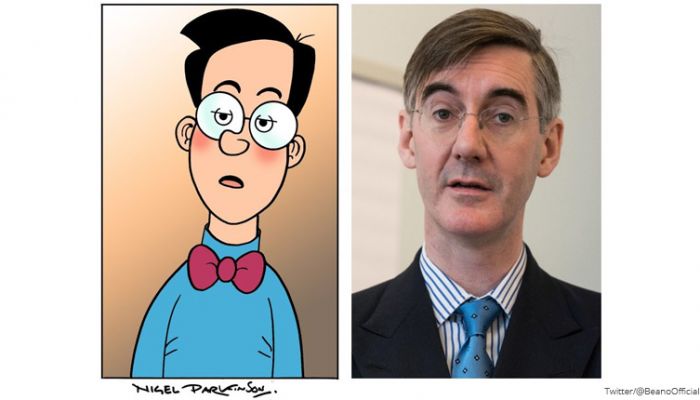 The Beano has written an open letter to Jacob Rees-Mogg, accusing the eccentric Conservative MP of ‘infringing the intellectual property rights’ of one of their cartoon characters and ‘masquerading as Walter Brown’ (aka Walter the Softy).

The letter goes on: ‘It is evident that there are numerous instances whereby you have adopted trademarked imagery and brand essences of the character to the benefit of enhancing your career and popularity’.

If anyone is unsure of what these essences are, the letter lists seven points they believe are attributes of the character of Walter the Softy, which are being copied by Rees-Mogg:

It then asks that Rees-Mogg ‘cease and desist’ in the ‘ongoing impersonation of the character, which remains the exclusive property of Beano Studios’. Tongue firmly in cheek, Mike Stirling, head of Beano Studios Scotland, signs off ‘A swift response on this matter would be greatly appreciate to avoid getting Teacher involved.’

The letter, tweeted out from Beano’s official account, has been caused by keen-eyed readers who have brought the issue to the comic strip’s attention. Replies to the tweet are just as mischievous:

The “Where’s Wally” people should go after him too.

Have you sent a similar one, on behalf of Dennis the Menace, to #BorisJohnson ‘s barber?

Many have applauded the Beano for a ‘perfect PR stunt’ and their great sense of fun. Rees-Mogg has yet to respond to the letter, much to the Beano’s disappointment.