You are here: Home / PR Pulse / Chris Evans is back on Virgin Radio
Previous Back to all Next 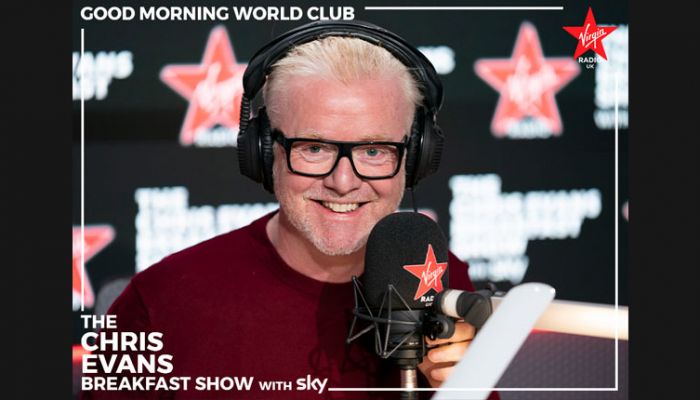 Chris Evans is back on Virgin Radio presenting the breakfast show, nearly 18 years after he left.

The Virgin Radio Evans has joined is different to the one he was dismissed from, as that version became Absolute Radio in 2008. This Virgin Radio is owned by Wireless Group, which in turn is owned by Murdoch’s News Corp, parent company of News UK (publisher of The Sun and The Times).

As Chris Evans joins the show, something else is removed – adverts. Evans’ show is sponsored by Sky, so he’ll discuss Sky programming but otherwise it’s the first commercial radio breakfast show without conventional adverts.

Monday’s show featured live performance from The Verve’s Richard Ashcroft, as well as guests Fay Ripley, Paul Whitehouse, Romesh Ranganathan and Rob Beckett. To introduce Ashcroft to the show Evans said: ‘There’s been a lot of talk about the first song I’m going to play, but I press buttons, I don’t play songs, musicians play songs. Why don’t we get a musician to play a song live? How about Richard Ashcroft?’

Evans is now up against Zoe Ball, who took over the Radio 2 Breakfast Show last week. Coincidentally, Evans’ first breakfast show on the original Virgin Radio in 1997 started on the same day as Zoe Ball’s Radio 1 Breakfast Show.

News UK’s publications were positive in their reviews – The Sun focused on the reaction from the fans, writing that Evans was ‘praised by fans and celebs’; while The Times gave the show four stars, writing: ‘Flash Chris is still full of himself, but there were glimpses of a humble, new age Chris, a parent who gives some thought to how radio can be a form of positive energy’.

The Telegraph gave the show three stars, writing: ‘The energy, one of the most successful parts of Evans’ breakfast show experience, was identical: optimistic, loud, and greeting the day with full-beam sunshine.’

The Guardian also gave him three stars, Mark Lawson – who last week gave Zoe Ball four stars – said: ‘Success of his Virgin venture will depend on whether listeners are more irritated by the disguised advertising of Murdoch interests than of a public service broadcaster.’

The Daily Mail highlighted the similarities the show had to his old Radio 2 slot: ‘As part of his exit deal it appears that Evans has been able to bring over many of his old jingles. The programme also features the return of items that were a staple on his BBC show, such as Big Screen Belter, Golden Oldie and Gobsmackers.’

Thank goodness for Chris Evans in the morning, well done on Virgin Radio today, I have really missed his chat over the last few weeks, he really makes the daily commute more bearable #chrisevansbreakfastshow https://t.co/TCOOnDPP7M

Its 11.36pm and I’m tucked up in bed listening to @achrisevans first morning show on @VirginRadioUK . It’s making me feel incredibly homesick and yet warm and fuzzy at the same time x Great show so far x

@VirginRadioUK absolutely superb to listen to Chris Evans on Virgin radio. Congratulations on your ‘International all request Monday’, wonderful to have you back in our home ?

Though clearly not everyone was impressed:

So Chris Evans went to Virgin for a “creative challenge” and yet is doing an identical show to Radio 2. (Right down to bringing all the jingles over) ?

Keep up to date with all the latest moves and changes on the radio and in the media with the Vuelio Media Database.