You are here: Home / Q&A / Cision Reads: The Angle
Previous Back to all Next

The Angle is a self-published novel from Police Professional reporter Liam Barnes. It follows trainee reporter Chris Young as he becomes a professional journalist and faces the challenges of digital media and the industry around him.

Cision Spoke to Liam about the book, digital media and his attitude towards PR. 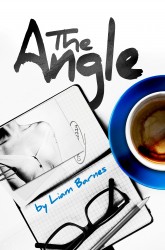 Describe your career history and current role?
Prior to joining Police Professional, I did my fast-track NCTJ training in 2011 with News Associates in Manchester. As well as a few placements here and there, I regularly wrote for Mancunian Matters during the course and intermittently throughout my interminable job hunt. I also spent a week last year at Channel 4 News researching a story which is still bubbling away somewhere, and for four years I wrote for Inside Futbol (I’ve since had to pause it for a bit as Police Professional’s the main focus and there’s a few other projects on my plate).

In many ways it’s a fairly typical picture of a (trainee) reporter’s early career path, with a few years comprising the odd work experience stint, days on placements and voluntary articles before I eventually landed an entry-level job. Like many of contemporaries I had a pretty difficult time of it before I got the first regular paid gig – it took me 23 interviews over 13 months post-training to finally convince someone I was worth hiring, so I have a good idea of the level of competition and a number of different papers and magazines.

How did your experiences shape the narrative?
The book is divided in to five parts, following Chris from the training centre to becoming managing editor on a regional, via local news, a B2B magazine and a national. I only have experience of the first three stages, so I had to use that famous journalistic skill of embroidering a basic factual skeleton with some muscular rhetoric and imagination. In general, though, it’s very clear that my experiences in these early stages of my career have hugely shaped the way the book unfolds.

A lot of the book is pretty cutting in its descriptions of elements of modern journalism which I’ve come across and am very concerned about, from unpaid internships and Leveson to the decline of local newspapers and the increasing lack of critical faculties in some of the younger journalists coming through.

One of the issues I examine the most, and one which I think has tended to be missed by more storied commentators, is that of journalism training. Along with the financial woes at various institutions, I think training is a major problem facing the industry. In my view the standard NCTJ units are not fit for purpose – too many are passing who shouldn’t, which makes it very difficult for employers to sort the good candidates from the bad when the avalanche of CVs follows an advertised vacancy. In some cases it’s considered so unreliable as a marker of quality that it’s ignored altogether.

The shorthand unit works, but pretty much all the other core modules need radical reform – in particular the reporting unit, which teaches only to turn around a press release and attempts to force you to write in such a colourless and cumbersome style I refused to follow it (as the novel demonstrates, I’m naturally fairly ornate, but I ramped it up as a reaction to the NCTJ’s guidelines). Sadly though, judging by the number of experienced NUJ members bolstering their earnings in NCTJ-approved pseudo-lecturing positions, I don’t see reform coming any time soon.

Journalism training, as well as not being suitable, is also very expensive, and when allied to the proliferation of unpaid positions and the plummeting starting salaries on the few trainee reporter roles available it does make me very concerned about the kind of candidates applying to be journalists in the future.

It’s quite negative about the profession, how were you hoping this would be received?
I think it’s more concerned for the position the profession is in than critical of the media or journalists. I have a lot of reporter friends, and I don’t regret my decision to become a journalist, even though it’s very tough and there are some bad days when you wonder if anyone ever reads your stuff, if it’s any good, if you’re too overworked to give a story the justice it deserves and if you can ever emulate the greats.

I have come into the industry for the idealistic Reithian reasons, as have many, and there are plenty of individuals who uphold these principles. And, compared to the judiciary, politicians or even the police, I’d much rather be held to account by a free press than any other estate or public body.

I’m sure most journalists would agree that we as a profession are in a very difficult position and have been for a decade or so – the lack of alacrity in adapting to digital technology has made it difficult for old hands and trainee reporters alike, and the aftermath of Leveson has only compounded the problem.

I think there’s hope in print-on-demand technology to cut costs if we could explore it, and I can’t see many of the big regional/local papers dying out as there will always be a market for them – but the pessimism or negativity reflects various career fears that a number of my media friends and acquaintances have relayed to me.

I don’t paint a very flattering picture of trainee reporters, but I have come across more questionable than creditable candidates, and others who’ve read my book have validated this opinion. There are (too) many uncritical ‘reporters’ who regurgitate press releases or churn out semi-literate blogs on uninteresting subjects – the best blogs are generally done by people with true expertise and decades in their professions, or at the very least a unique angle and singular wit.

I’m worried about the future of much of what I consider the highest form of journalism. Private Eye continues to be a shining beacon of what we can do well, while Exaro News is an excellent example of online investigative work, but how many papers would do what The Times did and let a reporter dig away at one story for years until it came off? Andrew Norfolk deserves a knighthood, but most managing editors would’ve given him the sack before he earned it.

It’s very negative about press officers/PRs, what do you think they could get out of this novel?
I’ve slightly exaggerated my views on PRs in the novel, but I think they know how many journalists feel about them! It’s probably mutual too, so I don’t feel too bad about publicly airing a caricature of something which is pretty much an open secret.

Essentially, I think what I’m trying to get across in the book is that there is a fundamental distinction between press officers and journalists that most people fail to recognise, even when they’re familiar with media practices. We ask questions, have deadlines and need to be objective, whereas they answer only what is put to them and always try to put a spin on things.

Journalists who move into PR may do it for entirely understandable reasons – an easier job with better pay and se
curity becomes less easy to resist when you have a family to support, for example – but it needs to be said that they are now in a different industry and are doing a different job, one which in my view is not bestowed with the same public service ethos and noble aims (well, at least some of us try).

The Angle is available on Smashwords. Profiles of Liam Barnes, Police Professional and thousands of other media contacts and outlets can be found in the CisionPoint Media Database.