You are here: Home / Political Headlines / Conference Headlines – Bright future and being cross with Boris
Previous Back to all Next 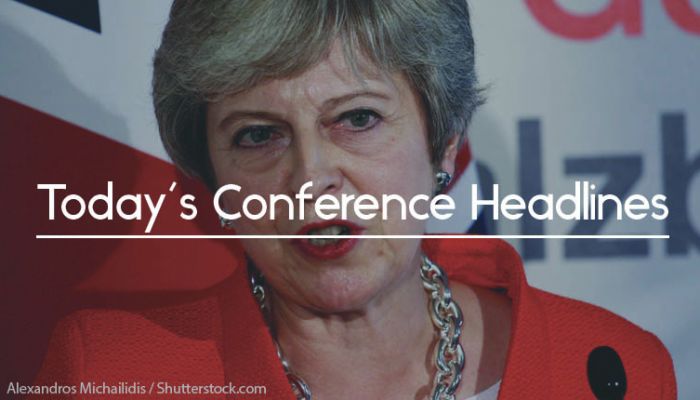 Today’s Conservative Party Conference headlines include May’s Conference speech, but being cross at Boris, DUP could topple the Government, and NHS must embrace technology.

May insists a bright future lies ahead
The Times is reporting ahead of Theresa May’s speech today, in which she will tell her Party that the ‘best days lie ahead’ for Britain. May will seek to unite the Conservatives ahead of a crucial period in the Brexit negotiations, with the European Commission set to formally respond to the outlined Chequers proposal next week.

May ‘cross’ at Boris speech
In an interview give to the BBC, May expressed her frustration at comments made by former Foreign Secretary Boris Johnson, who yesterday gave a speech to over a thousand people at the conference. May’s irritation centred on Johnson’s remarks regarding Northern Ireland, which she said reneged on Britain’s guarantee to Northern Ireland.

DUP could topple Conservative government
The Guardian is reporting that DUP leader in the Commons Nigel Dodds has reiterated the party’s belief in no border being imposed in the Irish sea. Dodds threatened to vote down May’s deal if it resulted in checks imposed between Northern Ireland and Britain, saying they would not support a Prime Minister that detached Northern Ireland from Britain.

NHS must embrace technology
The Telegraph has reported on comments made by Secretary of State for Health Matt Hancock at a fringe event, in which he encouraged the sector to adopt technological innovations and follow the lead of driverless cars. Hancock said the NHS would suffer if it waited any longer in introducing new technology.

EU figures angry with May’s immigration plan
The Guardian has picked up on opposition to the Prime Minister’s post-Brexit plan amongst senior EU politicians, with leader of the EPP group Manfred Weber and the EU’s Brexit coordinator Guy Verhofstadt both expressing concerns. May set out her vision to end free movement and low-skilled migration once the UK leaves, with EU figures calling for a united front against attempts to pick-off benefits of membership.