You are here: Home / Political Headlines / Conference Headlines – immigration rules, Theresa May booed &...
Previous Back to all Next 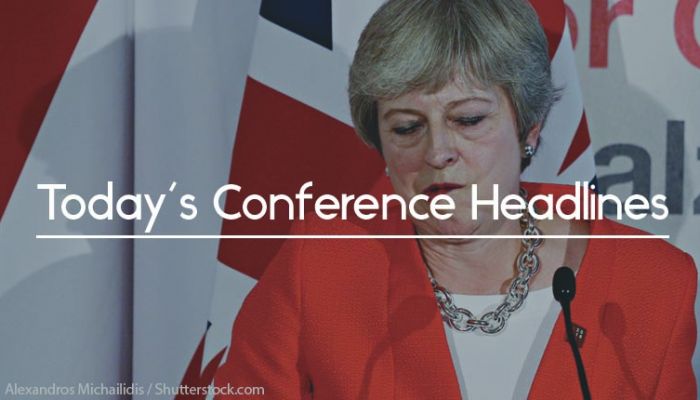 Today’s Conservative Party Conference headlines include new immigration rules, Theresa May booed by party members, Sajid Javid targeting middle class drug users and the call to get behind the PM.

New immigration rules
Sky reports on the Prime Minister promising new rules regarding immigration. The rules will give priority to highly skilled workers; immigrants with low skills or those coming to claim benefits will find it much harder to enter the country. These proposals were recommended by the Migration Advisory Committee.

Theresa May booed by party members
The Telegraph reports on the Prime Minister being booed at Party Conference when revealing her Chequers plan. May was heckled when referencing her proposals. This happened at a closed meeting of the National Conservative Convention where it is believed she is the first Prime Minister not to receive a standing ovation.

Get behind the Prime Minister
The Guardian reports on Ruth Davidson being the latest senior Conservative to ask the party to support Theresa May. She reminded her colleagues that they should apply Conservative values to their approach to Brexit. These remarks came after photos appeared of Boris Johnson in a field of something resembling wheat, which are widely considered to be mocking the Prime Minister.

Empty seats at the Conference
The Spectator gives its view on the number of empty seats for cabinet ministers’ speeches at the conference. The article says this is not due to a lack of attendees at the conference, it is because the speakers people want to hear from are not speaking on the main stage. It notes the attendance at events where Jacob Rees-Mogg is speaking is particular high.

Sign up for complimentary Conference emails, with summaries of main sessions, speakers and fringe events here.