You are here: Home / Political Headlines / Conference Headlines – Electable Lib Dems feeling sorry for May
Previous Back to all Next 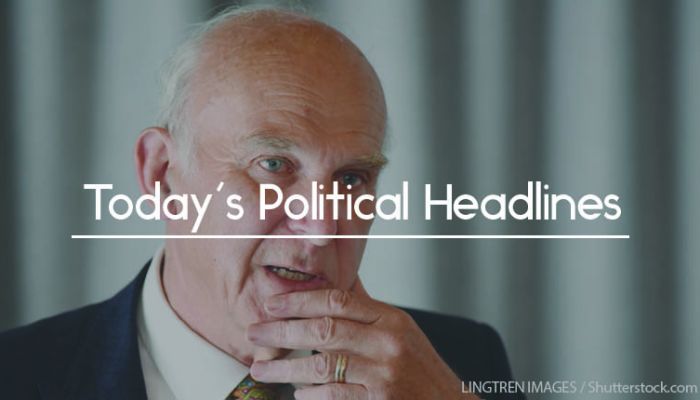 Today’s Lib Dem Party Conference Headlines include Vince Cable’s claims that the party is electable, the leader feeling sorry for May, liberalism but not by the Lib Dems and Clegg’s claims that the EU could extend the Brexit period.

The Liberal Democrats are electable
ITV reports its interview with leader of the Liberal Democrats, Vince Cable where he said a revival is taking place and the Lib Dems have a lot to be positive about. Cable acknowledged the results in the last two general elections have not been good enough but saw positives in the local elections.

Cable feels sorry for May
The Express reports speculates on Cable’s speech where it is expected he will tell Theresa May to stop delivering a Brexit she is not fully behind. Cable is expected to call on May to show true leadership and back a second referendum; he will also criticise those who want to leave the EU but are not considering the costs of it.

Liberalism but not by the Lib Dems
The Guardian has published an opinion piece where the Lib Dems are not seen as up to the job of representing Liberalism. The article points out that with Labour going further left and Theresa May facing opposition from those on the right of her party the Lib Dems should be making more progress.

Clegg says the EU could extend Brexit period
The BBC reports on remarks made by Nick Clegg suggesting European leaders are looking to find a way to give the UK more time to negotiate Brexit so a no-deal can be avoided. Clegg rejects the suggestion that has come from the Prime Minister that it is either the Chequers Plan or no-deal.

Cancel Brexit with no new referendum
The Sun reports on a policy that was voted on at the Lib Dem conference. The article says the Lib Dems will call on the Government to extend the article 50 process, so a referendum can be held. If the EU rejects the extension then they want the UK to revoke article 50, meaning the UK remains in the EU indefinitely.

The Lib Dems Conference is coming to a close but there’s plenty more to come from the other parties. Get complimentary bulletins straight to your inbox, sign up here.