You are here: Home / Q&A / ‘Digital is leading the way forward’ – Tim Hallissey...
Previous Back to all Next

The Times was named Sports Team of the Year at the annual Press Awards for 2013, which took place on Tuesday at the Marriott Grosvenor Square hotel in London. The man behind the winning team, Tim Hallissey, sports editor of The Times, spoke exclusively to Cision about how its digital platform is leading the way forward and what this award means for the newspaper. 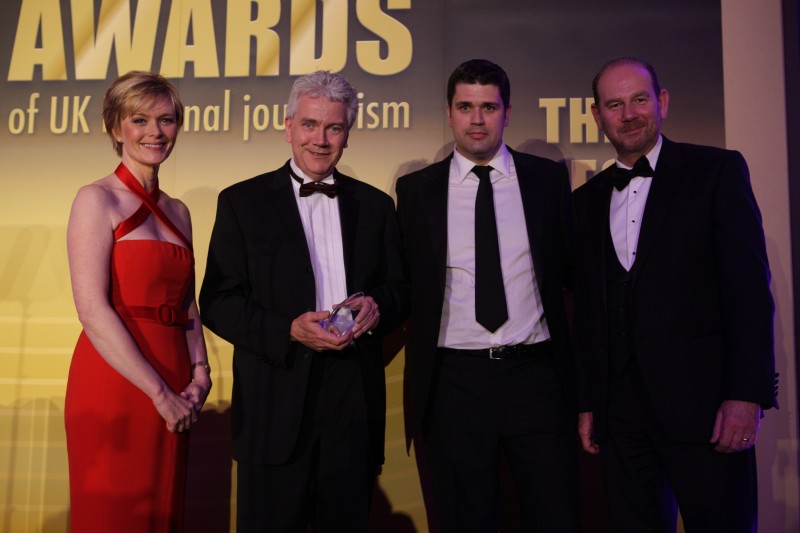 Tim Hallissey, second from the left, picked up the Best Sports Team award on behalf of his department at the Press Awards 2013 on Tuesday.

Congratulations on being named Sports Team of the Year. How does it feel?
Getting a team award is always gratifying. Everyone in the department, including writers, editors, sub-editors, photographers and designers have an extra spring in their step today. When individuals are honoured it is great but when a team gets recognised, it reflects well on the department, on the work that’s been done with one another – there’s a good buzz.

What does this award mean for the The Times?
It reaffirms how seriously we take sport and that we invest in it. We are always judged by our readers by way of subscription but being judged by peers is an important thing and is a kind of affirmation – we’re doing something right.

We have been fortunate to receive  the Sports Newspaper of the Year award from the Sports Journalism Association for two years in a row (2011 and 2012), but we didn’t win this year. So this win from the Press Awards was a continuation of the recognition, and it felt nice.

What has worked for The Times sports in 2013 specifically?
The main thing we did differently was introduce the goal clips feature, which is a digital service that goes to directly to people’s smartphones, tablets or desktops. It shows goals from the Premier League as they go in. So when say ManU scores a goal, five minutes later you can watch the goal right on your phone and get highlights right after the match. This was certainly our biggest project which we started in August 2013 when we signed a two year contract with the Premier League. It’s a new way of telling a story and was one of the main reasons we won this award. It was even mentioned in the judges’ citation, along with quality writing, range of coverage and presentation.

What are the lessons learnt from 2013?
We are constantly devising and developing on the digital front but the truth is that there’s any number of improvements you can do but you will still be left barely scratching the surface of what you can do. I’m not saying that print is dead, there are still very exciting things you can do but it is the mature part of our business – it is the growth, development and evolvement on the digital front that is leading us forward.

What advice would you give to budding sports journalists?
There’s an awful lot of noise so it is important to be distinctive. If you’re a writer, keep writing – it’s the crux of the job.

In sports especially, there’s no substitute for the passion and enthusiasm. People get excited by what they see and our objective as journalists is to communicate this emotion.

What has been your highlight in sports coverage?
The 2012 Olympics. Right from the opening ceremony to the closing ceremony of the Paralympics was the most memorable experience for any journalist in the UK.

Would you go forward or back in time?
I’m happy where I am.

What would your super power be?
To read the editor’s mind.

Which actor would play you in a film?
I suppose everyone says George Clooney, so yes him.

What are your weekends incomplete without?
A nice lunch with my wife.