You are here: Home / PR Pulse / Empathy, estate agents and a homeless epidemic – The Creative Shootout...
Previous Back to all Next 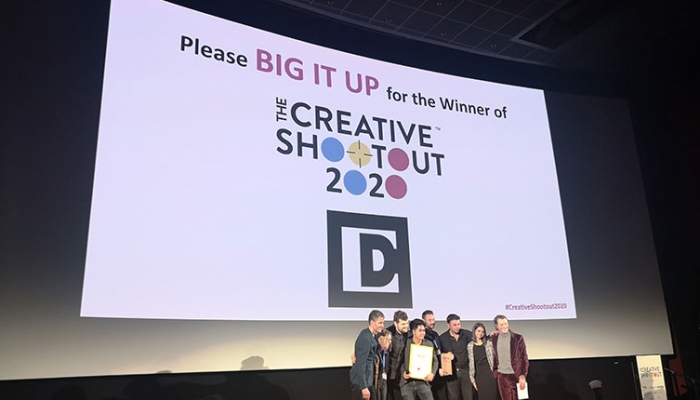 Last night The Creative Shootout took over Picturehouse Central for the live final, which saw eight agencies take to the stage, pitching for homeless charity Crisis.

Crisis is well-known for its hugely effective Christmas campaign with a mission to end homelessness for good. The brief it brought to the agencies competing in this year’s Creative Shootout set out to challenge their creative minds and shift the perception of Crisis being a Christmas charity to one that works all year round. Focusing on 18-34-year olds, the campaign ideas were required to galvanise the public and shift their belief that ending homelessness is an impossible goal.

At lunchtime, the teams were presented with the brief and given just four hours to come up with a stand-out campaign before pitching their ideas in just 10 minutes to an audience of 350 PR professionals and creatives.

The pitches ranged from renting out doorsteps and sofas on Rightmove to FleishmanHillard Fishburn’s ever increasing bank of real-life stories about homelessness 365 days of the year. Wavemaker and Alpaca came up with campaigns that tapped into the needs of ‘Generation Rent’ utilising popular housing websites such as Zoopla and Spareroom, while Fever PR took it to the next level creating their own estate agents, Fauxtons, with real-life pop-up venues around the UK.

Empathy played a big part in all the campaign pitches with Haygarth using the shocking fact that a family is made homeless every 13 minutes and asking the public to give up just 13 minutes of their time to help those who are homeless, from hairdressers offering free cuts to partnering with footballers to donate 13 minutes of their wage.

TracyLocke came at the brief from a different angle and based its campaign around the idea of treating homelessness as a virus outbreak; they even gave it a Latin medical name, ‘Profugo Populus’.

Asking the audience to observe the flag at the start of their pitch, the team from Grayling took inspiration from a place that has ended homelessness: Helsinki.  With a clever tag of #FinnishTheCrisis and using the Finnish people to share their story of how they got rid of homelessness, they created the idea of the world’s first digital march, spreading the message across media sites, news and partner websites.

Taking home The Creative Shootout crown for its heartfelt and moving pitch was Epoch Design. This was its first time entering the competition but the campaign to give the homeless back their voice won the judges over. Engaging directly with a millennial audience, Epoch Design put the ‘invisible’ to the forefront with open mic nights with only homeless performers and a podcast channel that would give them a voice.

Epoch Design will get to run its winning campaign with Crisis as well as a range of partners and Crisis’s existing agency network.

We are proud to show our continued support for this fantastic event, which encourages creativity across the industry. Well done to everyone who took part and congratulations to Epoch Design!