You are here: Home / PR / From Bedrooms to Boardrooms
Previous Back to all Next 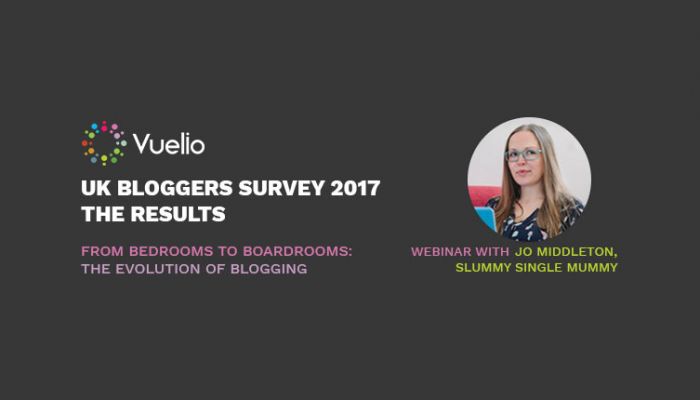 This morning, Vuelio hosted a webinar to discuss the results of the UK Bloggers Survey 2017. We were joined by top parenting blogger and trailblazer Jo Middleton, who writes the award-winning blog Slummy Single Mummy.

Jo started her blog in 2009, as a means to promote her freelance writing and journalism. It was about a year later (after she was sent a questionable freebie hand cream) that Jo considered the commercial aspects of blogging and started to believe it could become her main source of income.

Professional bloggers are on the rise; the survey revealed that 12% of bloggers now rely on it as their main source of income, that’s up from 8% in 2016. Jo has seen an increase in those that set out to become professional – where her rise was gradual, they’re focused on making money from the outset.

Jo believes this has upped everyone’s game, as in a professional industry only excellence will stand out.

Part of that professionalism comes from collaborations and brand partnerships, though the foundation of these relationships is not always straightforward. The survey revealed that 37% of bloggers get sent more than six pitches a week, while Jo receives in excess of 100. Though most of these are not successful, the number (and therefore success rate) does change throughout the year, with Jo more likely to take time over a pitch in a quieter month, like August.

And when it comes to successful pitches? Jo relies on both her own opinion of a brand as well as the opinions of her readers. Jo pointed out that lots of brands who work with influencers are attempting to re-establish people’s perceptions and so providing a creative way to impress bloggers is a great place to start.

She explained how Iceland approached her for a collaboration and while she wouldn’t normally have shopped at Iceland – considering it a place of kebab pizzas – her opinion has changed dramatically with each Iceland interaction and she can comfortably share her revised opinion of the supermarket to her readers. She also highlighted Iceland as a good brand to work with due to their desire for statistics and continued collaboration after posts have been published. Some brands request a post and then move on, making Jo feel like a tick box exercise.

When it comes to collaborating, disclosure is hugely important – especially as a whopping 13% of bloggers still flout advertising laws in their belief that not all collaborations need disclosure. To Jo this is ridiculous, she always makes her collaborations clear on posts and doesn’t think there’s any downside. Her readers know she’s a professional blogger and labelling something as paid-for doesn’t change her opinion.

She also commented on the rise in PRs requiring disclosure. In the last year she’s worked with more brands pushing disclosure from the very beginning of the relationship. There’s hopes this will trickle down into the blogosphere and change the statistics for 2018.