You are here: Home / media analysis / UK marketing budgets rise; PR spends decline
Previous Back to all Next

Largest recorded upward revision to marketing budgets in the UK reflects an economy on the mend. 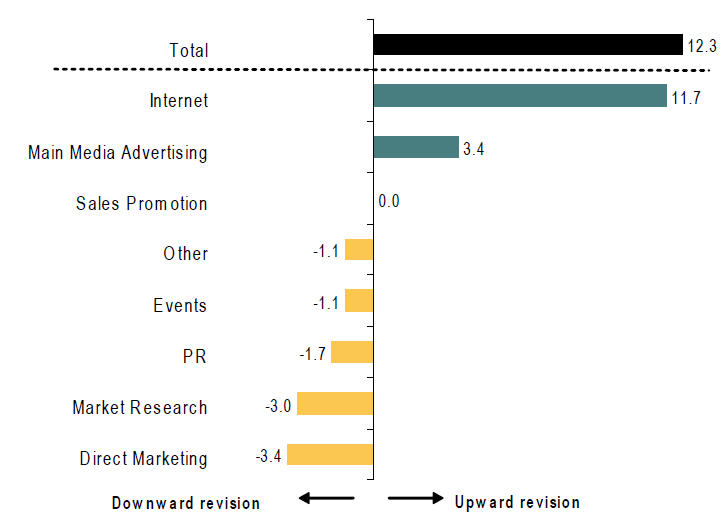 Results from the latest Bellwether report released today indicates that the UK’s marketing spend is at its highest level in the 13 years, even though budgets for PR have declined.

The report published quarterly by the IPA, the professional body for advertising media and marketing communications agencies in the UK, found that 12.3% of companies increased their advertising net budgets in the third quarter, compared to 7.3% in the second quarter.

These figures are expected to have a positive impact on overall UK ad spend which is now projected to be 2.4% in 2013 and 3.6% next year.

The spike in marketing budgets for companies were however not uniform across media verticals. The growth was led by the continuing growth in internet ad spends, with a net balance of +11.7% of companies boosting their budgets in this area. Spends were revived in mainstream media this quarter with a net increase of 3.4% of companies. However, direct marketing (down 3.4%), events (1.1%), market research (down 3.0%) and PR (down 1.7%) spends all suffered in Q3.

The report found that the rise in marketing budgets in the latter half of 2013 ‘is linked to a strong upturn in the confidence of companies regarding their own and their wider industry’s financial prospects.’

According to Chris Williamson, chief economist at Markit and author of the Bellwether report: ‘The increased appetite to spend on advertising and marketing is being fuelled by a surge in business optimism, with firms seeing their financial prospects to be the brightest for at least eight years.’

Paul Bainsfair, IPA director general added: ‘This latest Bellwether report will provide a welcome boost to our industry, building on last quarter’s results. It indicates that companies are beginning to move forward away from the recession and that the UK economy is on the rise again. This optimism will send a continued upbeat message to the advertising industry and the wider economy.’