You are here: Home / Q&A / Journalist Spotlight: Max Wooldridge
Previous Back to all Next

Max Wooldridge talks about compulsively checking his inbox, being a voyageur poet and Cate Blanchett playing him in a film. 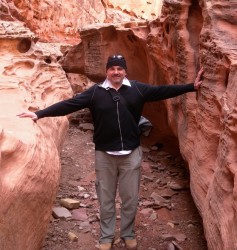 Max Wooldridge is a freelance travel writer whose work appears in the Mail on Sunday, Food and Travel magazine, and last year he carried out sports interviews for the BBC World Service.

Max fell into travel writing when he won the Observer Young Travel Writer of the Year in 1989, he said: ‘That was a lovely start and I’ve been doing travel ever since.’

Being the son of famous Daily Mail sports writer Ian Wooldridge was both a help and a hindrance. On the one hand he gave Max tips, such as: ‘Never use the word very, if you do use it – take it out.’ But on the other hand, wherever Max went everyone would just want to talk about his dad which ‘doesn’t do great shakes for the confidence’.

Describe a typical day
First thing in the morning I get up and think ‘Who owes me money?’ which is followed by the email ‘Any chance of payment this week?’. It is pretty much the same as it was 10 years ago, the typical life of a freelancer. I’m sure people think we get up at the crack of noon but you have to chase money, check emails and only then can you start writing. And now with Twitter and stuff there’s even more distractions. My resolution for this year is to either answer emails in the morning or the afternoon otherwise I’ll check them every 10 minutes and get upset when I haven’t got one; it becomes quite addictive.

How does commissioning/pitching work?
Two thirds of the time I get asked to do something and the other third Frank Barrett (travel editor at the Mail on Sunday) or another editor will pick up on an idea I’ll send. I can’t really write about luxury resorts purely because they don’t really give you much copy – everything’s pristine and ironed out. For a lot of them, it could be anywhere. I’ve always said I don’t want to read about someone having a fabulous time in paradise, that’s really boring; I’d much rather read about someone having a really bad time in paradise.

What do you like to write about?
The most recent story I’ve done was in Egypt when I went with the Lord and Lady Carnarvon. Lord Carnarvon’s great grandfather was the 5th Earl of Carnarvon who discovered Tutankhamun’s tomb in 1922. I went out for the 90th anniversary about six weeks ago. Going to Egypt at the moment is exciting because politically there’s a lot going on there.

My role and our role as travel writers is to teleport the reader to the destination. The words you put down on the page are virtual travel, giving the reader a sense of the experience and atmosphere of a destination. For me personally, I like it when things go wrong, I don’t mean airport delays and that sort of thing but meeting quirky people who say things out of the ordinary or that sum up where they live. People you meet on your travels who are honest add so much to the article.

All that said it’s not the ideal job because you’re always worried about money and cash flow. The amount of people who say: ‘Oh! I’d love to have your job’. There is a downside as well: it’s almost constant uncertainty.

What else are you working on at the moment?
I’ve written a couple of guidebooks and two books about music, Rock ‘n’ Roll London and Never Mind the Bollards. I am halfway through my first narrative travel book about Mont Ventoux in France called You’re Mad If You Go Back. Mont Ventoux is a really famous Tour De France mountain and the book is about how cycling saved my life and why people cycle up mountains. Cycling is becoming trendy and popular again and the mountain is in this year’s Tour, which is good for the book. I have a huge amount of work but this is why writers do what they do – to carve out a little piece of beauty.

How do you work with PRs?
I have some close friends who are PRs. I’ve always been nice to PRs because of that old phrase: ‘Be nice to people on the way up. You’ll meet them on your way down’. I think there are some travel writers and journalists who think what we do is incredibly different but I think it’s the same really. We’re all just trying to get stories out there, come up with interesting angles and entertaining articles. There’s not a lot of difference between a good PR and a journalist.

Although I live in Norfolk and I’m only back in London once or twice a month, I do prefer the one-to-one meetings. Some PRs are excellent, some aren’t so good. I got an email the other day from a PR describing herself as a brand alchemist, which I thought was the height of pretentiousness. It’s a bit like a travel writer describing themselves as a voyageur poet.

Things go wrong in travel writing – an editor might be replaced and your piece doesn’t get published – a good PR will understand that. I think the most useful thing for a PR is to keep the relationship going over the years because if things don’t work out with one piece, a travel writer will make up for it somewhere down the line. The ultimate travel article is independent and creates an atmosphere of where you’ve been. If there are negative quotes from people you meet that adds to the article; a good PR will understand that too.

I get sent a lot of hotel PR, and some of the places, especially with pictures, make you think ‘That looks nice; I’d like to stay there’. The ones that are a bit iffy are things like ‘New Beverage Manager’, which is not really a story for me. Good on the guy for getting a job but I can’t write about that.

Where’s the best place you’ve ever been?
Mixture of three really. I’ve got this thing about jungle temples so Cambodia, Guatemala and Peru. Can’t really choose between those three, it’s like choosing between your children. Cities-wise, I went to Lisbon last year and it’s the third of fourth time I’ve been there and I always seem to have a cracking time. It’s cheap, the people are great and they seem to like the English. And they’re a bit mad as we
ll which always helps.

Where would you like to go that you’ve never been?
It’s embarrassing really but I’ve never been to India and you can’t really call yourself a traveller, let alone a travel writer, without having been to India. I’ve got no excuses really because my cousin, Mike Wooldridge, was the BBC’s South Asia correspondent based in India for about 10 years and I didn’t even visit him.

Do you have any surprising hobbies or interest?
In the last year I’ve been reading some obscure stuff – one of my things is to read two books a week, so I pick up anything from biographies to books about butterflies. I’m also addicted to US crime dramas; I get box sets of things like The Shield, The Wire and The Sopranos. The worst thing is you watch one and think ‘I’ve got to watch another one!’, and then you’ve watched three in an evening and that’s three hours wasted.

What would your super power be?
Probably the ability to be exactly like I was when I was 20: able to survive on only four hours sleep, eat what I like, drink 10 pints without it having any effect, and wake up in the morning and feel fresh as a daisy. I want to have that freshness even in my mid-forties, fifties and sixties. Guilt free hedonism – I’ll be Hedonistic Man without the downsides.

Who would play you in a film?
Male or female? Cate Blanchett? Obviously Hugh Jackman but it’s probably more likely to be Russell Crowe because I look a little more like him – I’m a bit podgier than Jackman. Some people might say either Walter Matthau or Ross Kemp on a bad day.

Editorial information on Max Wooldridge, the Mail on Sunday, Food and Travel as well as thousands of other media contacts and outlets, can be found in the CisionPoint media database.