You are here: Home / Communications / LinkedIn beefs up content offering with Newsle
Previous Back to all Next 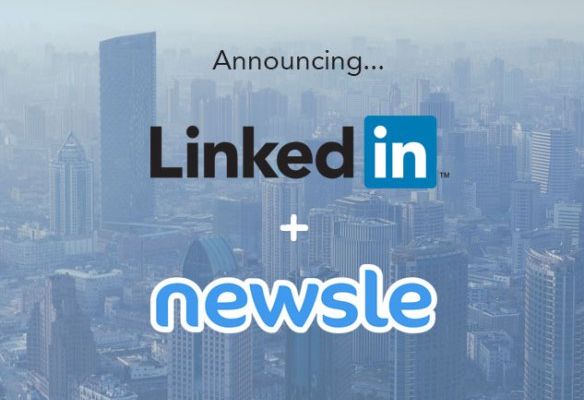 In a bid to boost its content marketing offering, LinkedIn has acquired Newsle, a California-based startup that updates its over 2 million user base on news articles, blogs, and other mentions of people and companies they follow on social networks.

The move comes on the back of several content-focused developments introduced by LinkedIn over the past year which are aimed at providing users with more ways to stay connected and network with business professionals. This includes LinkedIn opening its site to long form publishing; allowing users to add pictures, videos and presentations to their profile; an integrated partnership with news app Pulse; and the launch of its Influencer program.

While the actual size of the deal is not yet known, Forbes.com reported that before the acquisition, Newsle raised over $2 million in funding from investors like Lerer Ventures, SV Angel, Draper Fisher Jurvetson, Advance Publications , Maveron and Transmedia Capital.

Newsle’s official confirmation of the acquisition on its site says that it the company will continue to operate as a standalone product as they combine their functionality with LinkedIn’s core services.

Further, all of Newsle’s employees, including founders Jonah Varon and Axel Hansen, along with their team of designers will be making the move to LinkedIn.

‘We founded Newsle with a simple goal: to deliver important news about the people who matter to you. Three years and 2 million users later, we’re happy to say that we’re well on the way toward realizing that goal,’ said Axel and Jonah.

In a separate blog post, LinkedIn head of content products, Ryan Roslansky said: ‘LinkedIn and Newsle share a common goal: We both want to provide professional insights that make you better at what you do. For example, knowing more about the people in your network – like when they’re mentioned in the news – can surface relevant insights that help you hit your next meeting with them out of the park.’