You are here: Home / PR Pulse / Music Blogger Spotlight with Sam Ajilore, That Grape Juice
Previous Back to all Next 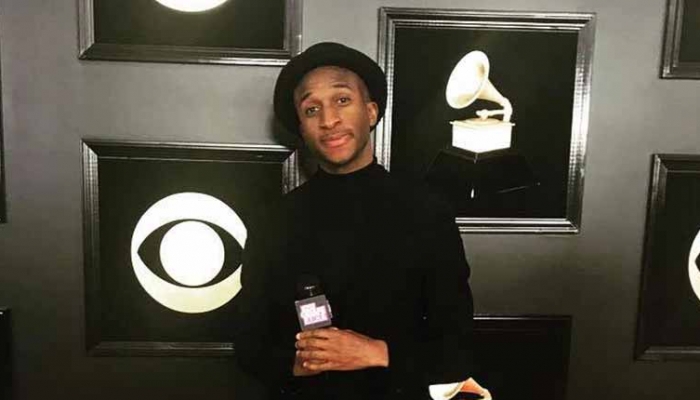 ‘That Grape Juice is effectively a site for music fans by music fans. We aim to inform, but also entertain in equal measure’. Here to entertain and inform us on music blog That Grape Juice, is Sam Ajilore who started the website as a hobby in 2007 and now draws in music fans across the world with in-depth features and interviews.

Read on to find out what makes the music sector such an interesting space to blog in, whether The Voice is still a good idea for new musicians and what lyric comes after ‘Hello’…

How did you get started with writing about music?
In school! My sister would always buy Urban magazines such as Essence, Pride and S2S – all of which I’d pick up and get lost in. The stories, the interviews, the reader feedback. It was such an immersive experience.

So, when blog culture had its initial boom in the mid-late 00s, I had a firm grasp on my Pop cultural palette and knew what the tone and approach of my site would be if I ever had one.

As history has it, I did launch That Grape Juice in 2007, but initially as a hobby. So to be here chatting with you, 13 years later (especially for this feature), is an honour!

What’s your favourite thing to post about on That Grape Juice?
At this point, it’s definitely original content! Celeb interviews, in-depth articles and editor round tables, as well as exclusive stories. Sure, the ‘trending’ finger-on-the-pulse stuff is the key driver (as is the case for most sites), but we have really realised the value of cultivating content people quite literally can’t find anywhere else.

What makes That Grape Juice different than others?
A few things! That Grape Juice has a distinctive tone of voice. It’s rooted in fact and is reliable, but it can also skew cheeky and get involved in the conversation it’s igniting.

Unlike pure celeb or gossip platforms (which I do enjoy, too), we also cater to the niche that are interested in music sales, industry trends and the behind-the-scenes happenings. Put simply, those who (like me) pick up a CD and get lost in the credits: who wrote what song, which label released it, so on and so forth.

That Grape Juice is effectively a site for music fans by music fans. We aim to inform, but also entertain in equal measure.

Mainly, though, I’d say it’s our emphasis on sparking discussion and debate. Humbly speaking, our comment section is popping! Which is something I’m really proud of; especially at a time where so much of the pop cultural dialogue has shifted to social media (an arena we also enjoy solid engagement in, too).

Do you think shows like The Voice and Britain’s Got Talent are still a good route into the music industry for wannabe musicians? What are the pros and cons?
I think it depends. On one hand, we live in such a DIY time that it totally makes sense for someone to appear on shows of this ilk – if the simple goal is exposure to acquire a bigger audience and leverage that towards a long-term plan. Winning, from that angle, would essentially be a bonus.

Yet, given how few stars are being churned out by such platforms these days, it does beg the question of whether it’s more valuable investing time and resources in direct-to-consumer approaches such as YouTube and playlisting on streaming services.

Ultimately, there are multiple ways of breaking in. The one consistent necessity though is having a DIY mentality. So, rather than waiting for a show to make one a star or dropping one song on YouTube with no strategy, it’s about having a plan. If it doesn’t work, then hatch another, then another and then another. Whatever the approach, acts today have to take agency over their careers if they want to advance.

Do you see the increase in the intersection of tech with music as a good thing – VR shows, holograms of musicians who are no longer with us?
I think it’s too soon to tell. I’m a tech geek at heart and a lover of spectacle, so I’m super intrigued about the elevation of the live music experience. At the same time, there are definitely ethical points of consideration that make it tricky terrain.

Beyond the growing fascination of reviving those who’ve passed away, I’d much prefer to see such technology used to cultivate exciting concert experiences for acts that are still here. Like a ‘Live In Your Living Room With _______’.

What was the first song/album you bought (and would you still listen to it)?
I honestly can’t remember! Much of my childhood was spent hounding my mum to buy us singles from Our Price, Virgin Megastore and HMV. By the time I was old enough to do so for myself, net culture meant anything you wanted to listen to was at your fingertips. Cornerstone albums for me, though, are Thriller, Janet and The Emancipation Of Mimi.

Favourite song lyric of all time?
Too many to name! But, I do find it fun watching what people follow with when singing the word ‘Hello…’

How do you work with PRs and brands?
On the PR front, it’s everything from content (hundreds of press releases a day), to arranging interviews, live reviews and original features.

With brands, it tends to be sponsorships and event coverage.

For PRs looking to work with you and your blog/website, how would you prefer they approach you?
We love working with PRs; it’s pretty much one of the most integral parts of our operation.

I think first it’s imperative those reaching out know the platform they’re contacting. For example, trying to solicit a feature for a heavy metal band on That Grape Juice is unlikely to yield fruitful results. While something of the pop or urban skew is much more on-brand.

I also find myself much more inclined to reply to personalised emails rather than the generic ‘Dear Sir/Madam’.

What other blogs do you read (whether music-related or not)?
I find myself super into lifestyle blogs of late. Randomly, interior design blogs, too.