You are here: Home / Politics / New MP Briefing: Education
Previous Back to all Next 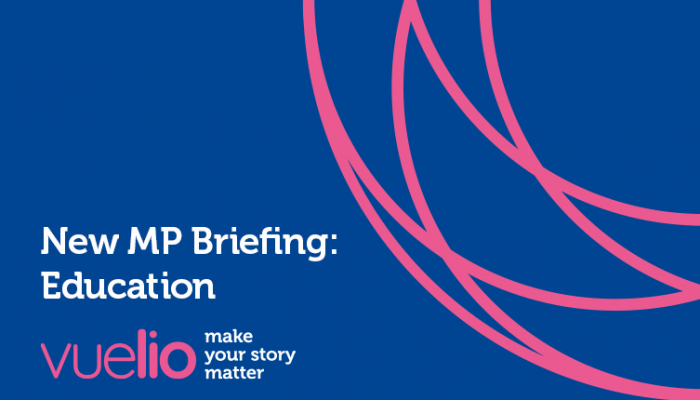 While Brexit and the tensions in the Middle East are likely to dominate the next few weeks in the House of Commons, the focus will also be on domestic policy for the first time since before the 2016 referendum.

While the UK’s future relationship with the EU and agreeing a trade deal in the short time frame of the next 12 months will be challenging, the 80–seat Conservative majority means the Government can at last move on to the domestic legislation that Boris Johnson has championed since taking office in July 2019.

With the largest Conservative majority since Margaret Thatcher achieved in 1987, and with Conservative MPs elected across the north of England and north Wales for the first time, it is clear that the Government will now ensure that key public services are better resourced.

Education funding is likely to be a factor in this increased public spending given Boris Johnson has repeatedly promised to ‘level up school funding’.

The Prime Minister’s speech in Downing Street the day after the election victory spoke of ‘providing better schools’ alongside a plan to deliver ‘better infrastructure, better education, better technology.

The Queen’s Speech, which was summarised by the Vuelio Political Monitoring team, set out the Government’s plans to give schools ‘a multi-billion-pound boost, investing a total of £14 billion more over three years’. This increase is in addition to an extra £4.5 billion for teacher’s pensions.

Increases in spending for this sector mean that by 2022-23, the core school’s budget will be £7.1 billion higher than it is currently. Teachers’ starting salaries will also be increased to £30,000 nationally by September 2022.

The Government has also pledged to renew its focus on further and technical education, providing £400 million for 16-19-year-old education, and investing in preparation for the roll out of T levels before the courses start in September 2020. The Queen’s Speech also pledged to invest an additional £3 billion in a ‘National Skills Fund’ over the course of the Parliament and to establish 20 new Institutes of Technology, offering higher technical education in Science, Technology, Engineering and Maths.

As the public affairs community, education campaigners and politicos get to know the intake of 140 new MPs and 15 former MPs returning to the Commons who served before the 2017 General Election, the Vuelio political team has profiled 19 MPs with a background in education.

The Briefing includes Jonathan Gullis, the new Conservative MP for Stoke-on-Trent North, who was previously a secondary school teacher in Birmingham and a trade union representative for the NASUWT, and Labour’s new Cynon Valley MP Beth Winter, who was a communications officer for the University and College Union (UCU) Wales.

It also includes Edward Timpson, the former Minister of State for Children and Families from 2015 to 2017, who returns to the House of Commons having lost his former constituency in 2017 to Labour.

The Briefing also profiles Conservative MP Laura Trott, a former head of family and education policy at 10 Downing Street. She has pledged to campaign for a new boy’s grammar school for her Sevenoaks constituency, which was previously represented by the former Defence Secretary, Sir Michael Fallon.

Get in touch with the Vuelio Political Team if you have any question regarding these briefings or if we can help your organisation get to know the 2019 intake of MPs better.