You are here: Home / Influencers / Paul Staines, Guido Fawkes: ‘I certainly didn’t go into Westminster t...
Previous Back to all Next 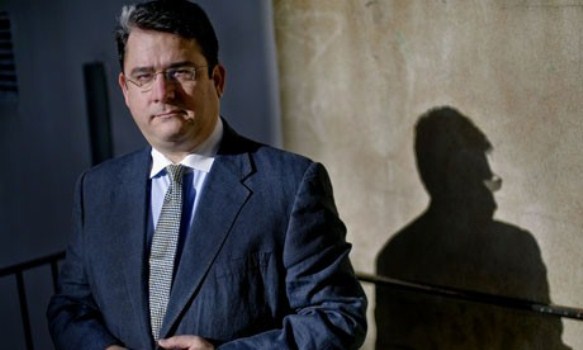 Paul Staines, editor of the leading political blogsite Guido Fawkes and UK’s number one ranked journalism blog Media Guido is one of the most successful and controversial bloggers of our time. As the Guido Fawkes’ Blog turns 10 years old this year, Paul spoke to us about the ‘startling impact’ it has had on politics, how he measures the blog’s success and the one story he would cover differently, if he could.

Since your blog was set up in 2004 it has become Britain’s most visited, and earned a reputation of being the most controversial political blog. What did you have in mind when you it set it up? What do you get out of it?  When I started the blog in 2004 we had a shabby opposition and a shabby parliament which was corrupt and the Lobby journalists were embedded within and were a part of the political system. I mainly set it up to have a go at the standard of political reporting and have some fun while doing so. The blogging at the time was done by wannabe leader writers who would produce 3,000 word essays and long opinion pieces that dragged on. I wanted to write something gossipy yet something that would expose the corruption in politics. In the US they had The Drudge Report and Wonkette and I thought I could do something along the same lines.

It will be 10 years old come September and I think we’ve achieved what we wanted to achieve through the blog in terms of reach and influence. It is the most popular source of political news online– earlier this month Ipsos MORI research found that Guido Fawkes is the best read political blog among MPs of all parties. The impact is startling and it took five years to achieve overnight success, but it has achieved all I hoped for when I started it.

How do you measure the success of your blog?  By the impact it has and the number of people that get sent to jail or resign as a result of it. This sort of impact comes from series of stories aimed at exposing corruption.

How many people have you sent to jail? We set in motion the chain of events that led to the jailings of Jim Devine MP and Lord Taylor in particular. We had a hand in the downfall of Chris Huhne, the resignation of Peter Hain from the Cabinet, the sacking of Damian McBride. The list is long.

Do you track the traffic your blog generates? I remember thinking 10 thousand unique hits a day was great and probably the upper limit for a specialist politics niche website but now on a good day there can be 300,000 visitors to the blog. I’m disappointed if we get below 100,000 a day. I think we’ve disrupted the established mainstream political media and the clientelism of the Lobby system and that to me is a success.

Are politicians really the ‘enemy’? I don’t know if they are enemies or more prey but I certainly didn’t go into Westminster to make friends and in that I’ve certainly succeeded.

What’s it like to be Guido Fawkes – a day in your life would be: There are three of us at Guido Fawkes now – that’s me, Harry Cole and Alex Wickham plus our sketch writer Simon Carr. A typical day here would be: wake up, grab the phone, look through Twitter then find out what the newswires are saying on politics, go through emails and basically track everything that’s going on from digital media monitoring services. The first story is up by 9 a.m. which is usually about taking the news agenda forward from overnight. We are not a newspaper so we don’t follow a news cycle as such – we are a news stream – so on an average we have anywhere between 8-10 posts a day but as we get closer to elections, it can be 20 a day. Once we get to the office, we have TV screens up, we monitor mentions through tweetdeck, we’re on our phones talking to people. Lunch is usually out, meeting people and evenings too are quite social with drinks, events, book launches etc – it’s about meeting and talking to people to get the news we want.

Are PRs a good source for your blog? We deal with press officers but the best stories don’t come from PRs. It’s what people don’t want to PR that gets to make news on our blog.

Is social media a strong referral source for your blog? We get about 10% of our traffic via Twitter and it is now competing with search and SEO in terms of referrals. We’re present on Facebook but low figures come in from there as the site is quite sticky and doesn’t direct traffic to the blog. My advertisers don’t get exposure from Facebook so we don’t push the channel much. Mark Zuckerberg is rich enough.

What can we expect to see more of in 2014? The same thing but this year much of the battle around the elections will be waged on Twitter. There will also be more video.

If you could turn back time, is there a story you would cover differently? Yes, the ones we get wrong. There was a sophisticated prank pulled on us – which conned us basically into believing that James Purnell, back when he was a Labour MP would run for the Labour leadership. He never did – it was all very embarrassing.