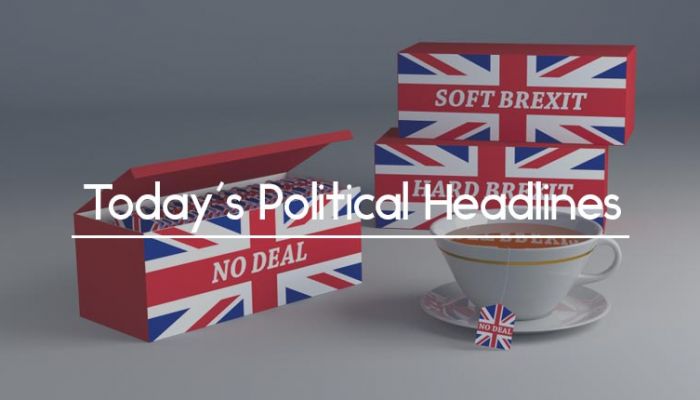 Today’s political headlines include Acrimony in Cabinet over potential Brexit talks extension, May calls on Parliament to ‘do its duty’ and Government document warns of no-deal impact.

‘Acrimony’ in Cabinet over potential Brexit talks extension
The Times claims that Theresa May’s decision to allow MPs to vote on extending negotiations for a ‘short, limited’ period if they reject her deal sparked ‘acrimony’ in yesterday’s Cabinet meeting. Liz Truss accused Amber Rudd, David Gauke and Greg Clark, who have been pushing for such a move, of ‘kamikaze’ behaviour. The Guardian adds that Cabinet ministers including Philip Hammond and Amber Rudd told May that she should use an extension of the Brexit negotiations to ‘find a new coalition in Parliament’ and tackle the Conservative Party’s Brexiteer wing.

May calls on Parliament to ‘do its duty’
Theresa May has written in the Daily Mail that her ‘engagement’ with the EU over Brexit has ‘already begun to bear fruit’, calling on Parliament to vote for her deal and ‘do its duty so our country can move forward’, adding that she doesn’t want an Article 50 extension. David Davis also writes in the paper, claiming that fears about no-deal are ‘exaggerated’ and that while it might ‘be economically difficult, no Brexit would be a democratic disaster’.

Government document warns of no-deal Brexit impact
The Guardian reports that a new document published by the Government after being repeatedly demanded by Anna Soubry warns that a no-deal Brexit could make the British economy 6%-9% weaker, lead to Northern Irish businesses failing and increase food prices.

Probation contractors attacked over murders by offenders they supervised
In an exclusive, the Daily Mirror reveals that in the first four years since probation was privatised, criminals being monitored by contractors have killed 225 people, compared to 142 murders by higher-risk offenders being monitored by the state probation service. The figures were obtained by Plaid Cymru MP Liz Saville Roberts who called for an end to privatisation. Harry Fletcher of the Victims Rights Campaign said the news was a ‘scandal’.

Allin-Khan tells MPs her father was left ‘bleeding and terrified’ in council care home
The Guardian reports that Labour’s Shadow Sport Minister Dr Rosena Allin-Khan told the Commons during a debate yesterday that her father was left ‘bruised, bleeding and terrified’ in a Wandsworth Council care facility, with the council’s director of adult social services telling her that he ‘had asked for it’.

Williamson criticised after claiming Labour was ‘too apologetic’ for antisemitism
The BBC reports that Labour MP Chris Williamson has been criticised after video footage of him claiming that his party had been ‘too apologetic’ about antisemitism emerged, and it was revealed that he had booked a room in Parliament to screen a film about Jackie Walker, who was suspended from Labour over allegedly antisemitic comments.

Department for Transport criticised over rail failures
The Times carries details of a new report by the Commons Public Accounts Committee which warns that 2018’s ‘year of hell’ on the rail network could be repeated due to timetable changes and increasing engineering work, with the Department for Transport having failed to learn lessons, not having clear sight of the timetabling process and as a result ‘passengers and taxpayers risk continuing to pay the price for the department’s failures’.

Corbyn apologises for breaching Commons rules over foreign visit
The Daily Telegraph says that Jeremy Corbyn has ‘apologised unreservedly’ after he was found to have breached Commons rules by not declaring a trip to America with the CND. However, he’s been cleared of allegations that a further 16 trips broke the rules, including a trip to Tunisia where he participated in a controversial wreath-laying ceremony.