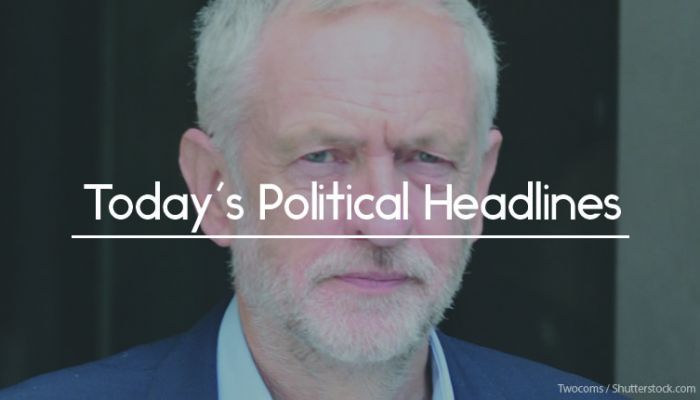 Labour promises to settle antisemitism cases by July
The BBC reports that Labour has promised to settle the ‘vast majority’ of antisemitism cases by the end of July, following a meeting between Jeremy Corbyn, the Jewish Leadership Council and the Board of Deputies of British Jews. The organisations said that the talks were a ‘disappointing, missed opportunity’ and that a plan of action was not agreed, although Corbyn claimed that the meeting was ‘positive and constructive’.

Opposition parties offer support for Government action on junk food
The Times reports that buy-one-get-one-free deals on junk food will be banned, with action to combat unhealthy lifestyles due to be announced before the end of June. Labour, the Liberal Democrats and the Scottish National Party have written to the Prime Minister in a joint letter co-ordinated by Jamie Oliver, warning that she must not backtrack on the measures and offering their support for ‘bold action’.

Johnson challenges May to introduce amnesty for illegal immigrants
The Daily Telegraph claims that Foreign Secretary Boris Johnson challenged the Prime Minister to introduce an amnesty for illegal immigrants at a meeting of the Cabinet, providing that they are ‘squeaky clean’ and don’t have criminal records. Meanwhile, The Guardian reports that the number of cases of Home Office mistreatment of non-Caribbean Commonwealth-born citizens is increasing.

Rees-Mogg describes ‘customs partnership’ plans as ‘completely cretinous’
The BBC says that Conservative backbencher Jacob Rees-Mogg has described Theresa May’s plan for a ‘customs partnership’ with the EU after Brexit as ‘completely cretinous’. Speaking at an event organised by the thinktank Open Europe, he said that Theresa May’s attitude to Brexit was ‘enigmatic’ and that ‘it’s hard to read what level of enthusiasm she has for it’.

Record number of EU nurses leave UK
The Guardian reports that record numbers of nurses and midwives from EU27 countries left the UK last year, which it says fuels ‘fears that a Brexit brain drain will deepen the NHS’s already chronic staffing crisis.’ The number of EU nurses and midwives arriving to work in the EU has also fallen to its lowest level.

UK exploring launch of rival to EU’s Galileo system
According to the Financial Times, the Government is exploring plans to launch its own satellite navigation system as a rival to the EU’s Galileo system, while Business Secretary Greg Clark is also taking legal advice on whether the UK will be able to reclaim the €1.4bn it has invested in the project since 2003, after the EU’s decision to exclude the UK from secure parts of the project.

Vuelio political services curate these headlines as part of their political intelligence.