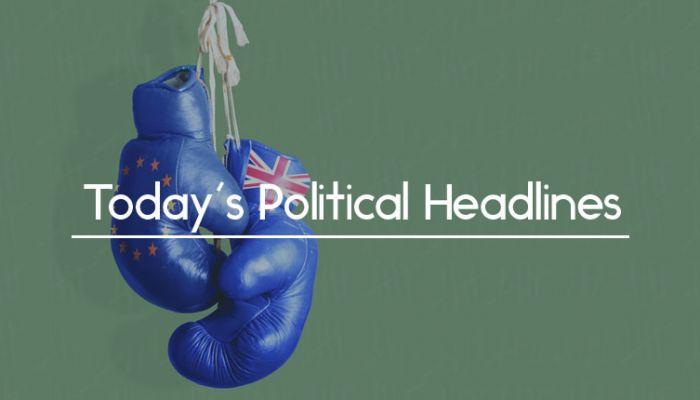 UK to try to outmanoeuvre EU on post-Brexit relationship
The Sun says that the Government has agreed a ‘high-risk’ plan to publish a post-Brexit trade deal wish list. It will publish the draft text of the political statement on the future relationship in a bid to outmanoeuvre the EU. The Daily Mail warns that British citizens may have to pay £6 every time they visit the EU after Brexit, while The Daily Telegraph says that the DUP has threatened to bring down the Government if the UK stays in the customs union or single market after Brexit, ahead of a symbolic vote by MPs on the customs union today.

Home Office had migrant removal targets
The BBC reports that immigration enforcement teams had been set targets to remove people with no right to stay in the country. Giving evidence to MPs over the Windrush scandal, Home Secretary Amber Rudd had denied that targets were currently in use, but a report shows that they existed in December 2015.

Raab aide caught selling sex online, sparking security fears
In an exclusive, the Daily Mirror reveals that an aide to Housing Minister Dominic Raab has been caught selling sex to ‘sugar daddies’, telling an undercover reporter that ‘I know everything about him. I know his every move’. The paper calls this a ‘huge potential security breach’ as it makes the aide a possible blackmail target.

Tory rebels to force Government to make overseas territories more transparent
The Times claims that new laws forcing the UK’s overseas territories to improve transparency and expose ‘corrupt Russian oligarchs’ are to be forced on the Government. A coalition of Tory rebels, Labour, the SNP and other opposition parties will challenge the Government next week. Andrew Mitchell, leader of the rebels, said that he had the backing of 19 Conservative backbenchers.

£300m investment in AI in new sector deal
The Financial Times reports that the Government is to invest £300m into artificial intelligence research in a bid to fend off competition from France and Germany. The new AI sector deal will be jointly overseen by the Department for Business, Energy and Industrial Strategy and the Department for Digital, Culture, Media and Sport.

Task force to support veterans will be announced today
The Sun says that the Government is to launch a task force of ministers from every department to support veterans. Defence Secretary Gavin Williamson will launch the Veterans Strategy today at a meeting of the Ministerial Covenant and Veterans Board.

Heidi Alexander may quit Commons to work for Mayor of London
According to The Guardian, Labour MP Heidi Alexander is considering leaving the House of Commons in order to work for the Mayor of London, Sadiq Khan, in a ‘prominent role’. The Lewisham East MP quit the frontbench in protest in 2016 and co-chairs Labour’s campaign for the single market.

Vuelio political services can provide tailored content from the world of politics.