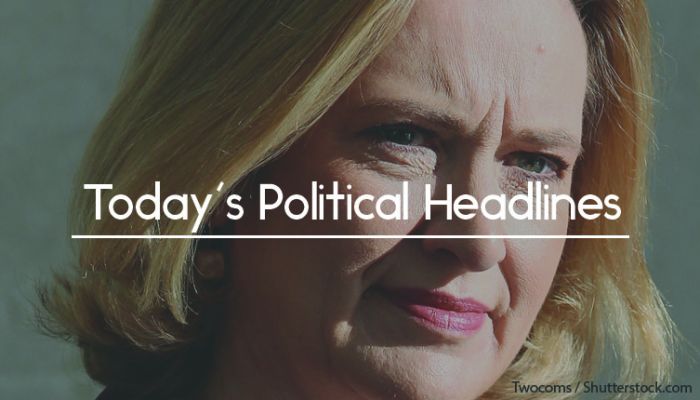 Rudd vows to change Home Office culture
The Times says that Amber Rudd has promised to change the culture of the Home Office, amid concerns that the Windrush scandal could lead the Tories to lose ethic minority support. An emergency package of measures announced by the Home Secretary will see every Commonwealth citizen who arrived in the UK between 1948 and 1988 offered citizenship or settled status. According to the Financial Times, she has also claimed that the post-Brexit registration system for EU nationals will be ‘as easy to use as setting up an online account at LK Bennett’.

Corbyn to meet Jewish leaders
The BBC reports that Jeremy Corbyn is to meet the Jewish Leadership Council and the Board of Deputies of British Jews today to discuss the steps he has taken to address antisemitism in the Labour Party. The bodies want disciplinary cases to be sped up and elected officials to be thrown out if they share a platform with offenders.

Government suffers third Brexit defeat in Lords
The Guardian reports that the Government was defeated on the EU Withdrawal Bill in the House of Lords yesterday, with peers voting by a majority of 77 to keep the fundamental charter of EU rights in force after Brexit. The Government also lost a series of other votes that could have given ministers the power to restrict the use of EU law principles to challenge the Government, but won a vote on public health protection.

EU note suggests their border plan may not work
The Times has seen a ‘confidential diplomatic note’ in which the European Commission and other EU negotiators admit that their ‘backstop’ plan to prevent a hard border in Ireland after Brexit will not work, as Northern Ireland could become a loophole in the single market.

May urged to confront pro-EU rebels
According to The Sun, Theresa May is being urged by her allies to confront pro-EU rebels with a vote in the Commons, with the paper reporting that May will instead tell ministers to stay away from a debate on the customs union on Thursday. Allies have apparently warned May that avoiding confrontation is ‘emboldening Brussels negotiators’.

Food banks hand out record number of meals
The Daily Mirror reports that the Trussell Trust, the UK’s largest food bank operator, handed out nearly 12 million meals in the last year, a record number and an increase of 13% on the last year. The trust called on the Government to increase benefits in line with the cost of essentials and said that some claimants had been ‘let down’ by the Universal Credit rollout.

Government nearing deal over plans to cut gambling machine stakes
The Times says that the Treasury has now signalled that a deal has been reached on plans to cut the maximum stake on highly addictive gambling machines to £2. Allies of the Chancellor said that an agreement with Culture Secretary Matt Hancock was ‘very nearly there’ and that levies on other forms of gambling would increase to replace lost revenue.

These headlines brought to you by Vuelio political services.