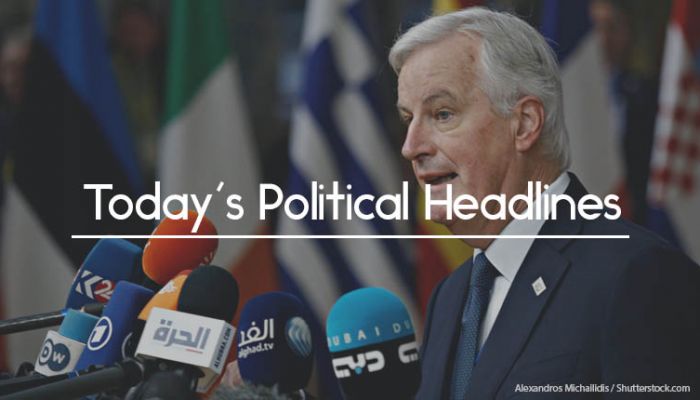 Today’s political headlines include Barnier’s rejection of a backstop renegotiation, May and Corbyn’s talk, Sajid Javid’s knife crime measure criticised and May prepares to woo Labour MPs with cash.

Barnier says the backstop is here to stay
The BBC reports on remarks by Michel Barnier where he says that the Irish backstop cannot be renegotiated. The EU’s chief negotiator was speaking in the European Parliament where he suggested that there are no other realistic solutions to the issue. These remarks came after the House of Commons voted to get the Prime Minister to seek another arrangement. The story reports that both Donald Tusk and Jean-Claude Juncker echoed the remarks of Barnier.

May and Corbyn has ‘serious and engaged’ talk on a possible customs union
The Guardian reports on a discussion between Theresa May and Jeremy Corbyn where they discussed Brexit. The outcome of the meeting is that both Number 10 and Labour are disagreeing on whether May would be willing to soften her opposition to a customs union with the EU after Brexit. The Labour leader met May after MPs voted against a no-deal scenario, this is something Corbyn had previously refused to rule out. The two are expected to meet again with the next few days.

Sajid Javid’s measures to tackle knife crime criticised
The Mirror report on criticism from bereaved parents and anti-knife crime campaigners directed at the Home Secretary’s measures to try to tackle knife crime. Some of the measures picked up on is limiting the use of social media of suspects, curfews and geographical restrictions. Campaigners want the Government to stop intervening and allow the police to enforce the law under the current laws, one of the other major criticisms is the legislation will not solve anything if communities are not worked with. Javid has an article in the Telegraph where he states his own concerns with his own children when they are on a night out.

May prepares to offer Labour MPs cash injection to Leave constituencies
The Times are reporting that Theresa May is planning to win round Labour MPs by offering investment in Leave-backing areas of the country. May is hoping to secure the backing of 20 Labour MPs in the next vote on the withdrawal agreement, with discussions taking place directly between Number 10 and MPs including John Mann and Kevin Barron, without the involvement of Jeremy Corbyn.

Tom Watson v Tony the Tiger
The Sun report on remarks made by Deputy Leader of the Labour Party, Tom Watson at the  Advertising Association conference where he took aim at cereals and how they encourage a sugary diet. Watson said food adverts should encourage people to go to work on an egg not obesity inducing cereal. Watson called for companies to take action and remove characters from their packaging and pledged that if advertisers take these steps he will be their biggest advocate when Labour is next in power.

Wright urges social media companies to more to tackle harmful content
Writing in The Daily Telegraph ahead of a speech today, Culture Secretary Jeremy Wright has told social media giants that they must do more to address the promotion of harmful online content, threatening sanctions against those who do not address the issue. Wright will outline the Government’s approach ahead of a White Paper, which will further detail the responsibilities of social media companies.

PM’s Europe Adviser warned the PM against renegotiating with Brussels
The Telegraph reports that Oliver Robbins told Theresa May this week that her plan to renegotiate her own Brexit deal was not going to work. He allegedly raised concerns over the so-called Malthouse-compromise to secure changes to the Northern Ireland backstop.

Not sure how the backstop negotiations affect you? Find out with Vuelio Political Services.