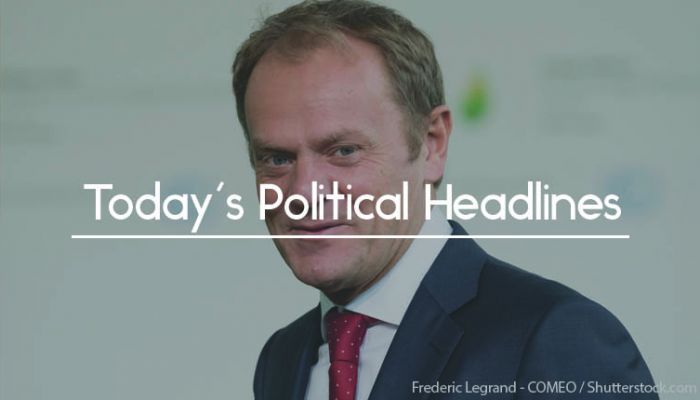 May left ‘humiliated’ as EU leaders reject Chequers deal
As The Times says, Theresa May was ‘humiliated’ by EU leaders yesterday as they rejected her Chequers strategy for Brexit. The paper adds that a number of factors led to this outcome, including May’s decision to read out an article she had written for Die Welt, her rejection of revised proposals on Ireland without seeing the text, reports that International Trade Secretary Liam Fox was planning to scrap food regulations to secure a trade deal with the USA, support for May from Hungary’s President Viktor Orban, and her admission that revised Irish backstop proposals wouldn’t be ready by the next summit in October.

Javid promises to target ‘county lines’ gang network
Writing for the Daily Mail, Home Secretary Sajid Javid has promised to combat the ‘county lines’ network, under which drugs gangs use children as couriers to supply drugs in small towns and seaside resorts. He has announced a £3.6m National County Lines Co-ordination Centre, allowing police forces to work together in their efforts to tackle the problem, and that there will be several large-scale raids in the next week.

UK creates £250m cyber-force
The Times reports that the Ministry of Defence and GCHQ are setting-up a £250m cyber-force which will aim to target hostile states, terrorist groups and gangs, with around 2,000 personnel – a quadrupling of the number of people in offensive cyber positions. This follows a review commissioned by Defence Secretary Gavin Williamson, with the creation of the force due to be officially announced soon.

Williamson pledges more support for Ukrainian military
The Daily Telegraph has visited the Ukraine with Defence Secretary Gavin Williamson, paying a trip to the frontline of the conflict with Russian-backed separatists. Williamson accuses the Russians of trying to ‘reverse the outcome of the Cold War’ and said that the UK was ‘upping our training and support efforts’ with the Ukrainian armed forces.

60% of public support tax increases to fund public spending
The Guardian reports that the latest British Social Attitudes survey shows that 60% of the British public would now support an increase in taxes to fund higher public spending – the highest level for 15 years. This includes 53% of Conservative supporters. The public’s top public spending priority was revealed to be health, followed by education.

Labour would see surge in support if it backed second referendum
The Independent reveals that two new polls show that backing a second referendum on Brexit would give Labour a boost in support which would ‘carry it to the brink of Government’. A YouGov poll shows that backing the People’s Vote would see the party gain an extra 1.5m voters, while an ICM poll showed that the party would win marginal seats from the Tories – including some that voted to leave the EU.

The Labour Party Conference is nearly upon us. Sign up for free coverage directly to your inbox here.