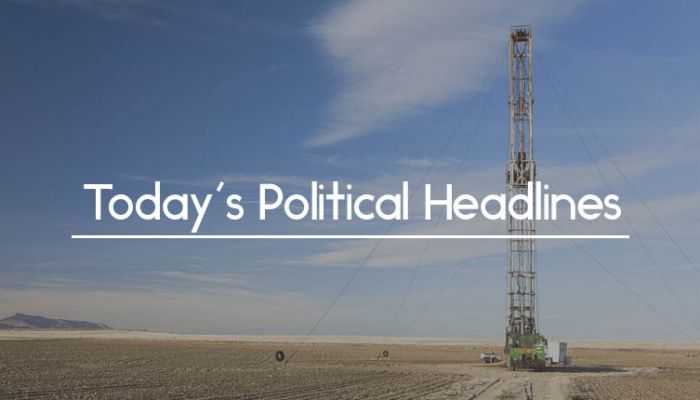 Fracking chief quits, claiming Government has imposed a ‘de facto ban’
The Times reports that the Government’s shale gas commissioner Natascha Engel has quit after seven months in the role. She claimed that the Government had ‘instituted a de facto ban’ on fracking by shying away from reviewing a rule which means that operations must be suspended whenever a tremor above 0.5 magnitude is recorded. She said that climate activism, such as that of Greta Thunberg, ‘will hustle politicians into making bad decisions’, while ‘Brexit paralysis’ was also to blame for a temporary rule becoming permanent.

Home Office asylum unit criticised
The Guardian reveals that whistleblowers from a Home Office unit known as the Dublin Cessation Team, which determines which EU member states should determine an asylum-seeker’s claim, have claimed that its ‘overworked, under-skilled, bullied and highly stressed DCT caseworkers’ are frequently making mistakes causing individuals to be held in unlawful detention. A range of other allegations have also been made, including long delays and targets incentivising applications to be rejected.

Hunt warns of Huawei risks
The Daily Telegraph says that Foreign Secretary Jeremy Hunt has warned that Huawei has a legal obligation to cooperate with Chinese’s intelligence services. He said it was ‘right to have a degree of caution about the role of large Chinese companies’ and rejected the idea that the UK was being influenced by the USA as ‘absolute nonsense’. He added that he was happy to hand over his phone – and that of his special advisor – to the ongoing leak inquiry.

May looks for legislation to avoid Queen’s Speech
The Times says that Theresa May is looking for legislation to justify delaying the Queen’s Speech until the autumn. A list produced by Downing Street includes changes to tax for sporting testimonials and increasing sentences for animal cruelty, with other proposals including legislation on domestic abuse, tenants’ rights and restoring Parliament.

Damian Green publishes social care proposals
The Daily Mail carries details of a new report on social care by Theresa May’s former deputy, Damian Green for the Centre for Policy Studies. His plans would deliver a basic state-funded level of social care, which recipients could upgrade using savings, and would be funded by a lump sum on retirement, a surcharge on National Insurance for over-50s or a tax on the winter fuel allowance.

Damian Hinds blames social media firms for fuelling eating disorders
In an exclusive, The Sun reports that Education Secretary Damian Hinds has blamed social media firms for fuelling teenage eating disorders by disseminating ‘dangerous ideas of perfection’. He will be meeting executives from Facebook, Instagram, Twitter and Snapchat today and says they ‘get serious about their responsibility to young people’.

Tories set to lose 800 councillors
The Guardian reports Conservative election analyst Lord Hayward believes that his party is on course to lose around 500 seats to the Liberal Democrats and a further 300 to Labour in this week’s local elections. He attributed this to the failure to deliver a Brexit deal, adding that he also expected ‘disenchantment’ with the main parties to reduce turnout.

Government advisors to recommend stricter greenhouse gas targets
The Daily Telegraph reports that the Climate Change Committee, which advises the Government, will recommend on Thursday that the Government should axe its target to cut greenhouse gas emissions by 80% by 2050, instead saying that it should aim to have eradicated or offset all greenhouse gases by then. Policy suggestions include reducing red meat consumption, planting more trees and building new onshore wind turbines.

Stay on top of the issues that matter to you with Vuelio Political Services.